Circassians march to Russian consulate on the anniversary of exile 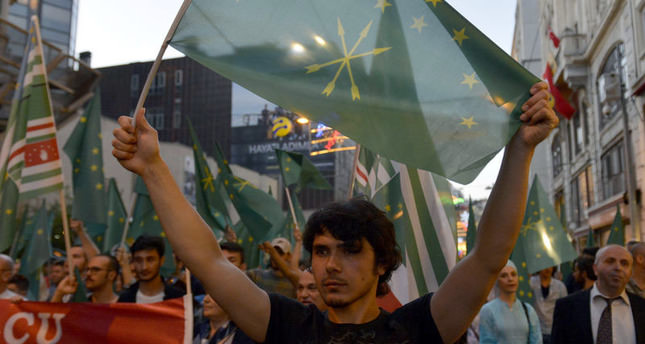 by Daily Sabah May 22, 2014 12:00 am
ISTANBUL — Demonstrators of Circassian origin marched to the Russian consulate in Istanbul on Wednesday evening to mark the 150th anniversary of the exile of ethnic groups hailing from the Caucasian region at the hands of the Russian Empire.

Descendants of the Circassian community which was sent into exile after Russia defeated an army of Caucasian peoples, gathered in Istanbul at an event organized by Federation of Circassian Associations, holding banners and "Circassian" flags. They chanted slogans "Circassia will not be Russian territory," "Russia will pay for genocide" and held torches as they marched.

Turkish riot police were deployed around the consulate where demonstrators delivered statements.

İshak Akbay, an artist of Circassian origin, said they would never forget "exile and genocide of Circassians."
Kenan Kaplan, head of a local nongovernmental organization of Circassian community, said Circassians exiled from Russia more than one century ago are now living in 40 countries and face a risk of assimilation and forgetting their language, culture and ethnic identity. Kaplan said they demanded Russia restore their historical rights. "The Russian Empire committed Circassian genocide and today's Russian Federation is heir to the empire. Therefore, the Russian Federation should recognize genocide, apologize to Circassians, comply with international legal norms and pave the way for historic Circassian lands to be Circassia again," Kaplan said.

Nusret Baş, president of Federation of Circassian Associations said remembering of incidents dating back 150 years are not an example of retaliation but "rather a pursuit of justice." Baş said they are merely seeking the reinstatement of rights to a people whose lands are occupied, expelled from their homeland and driven to extinction. Baş said Russia had to admit its hand in the "Circassian genocide" and take steps to that extent. "All Circassians living abroad should be granted citizenship of [republics] where their homeland is located without any preconditions and Russia should take measures to protect the ethnic and cultural identity of Circassians currently living in their homeland. We will continue our struggle until our national rights are reinstated," Baş said.

Following the demonstration, some protesters recited poems on "genocide" and laid a black wreath at the gate of the consulate to protest Russia.

Over 500,000 people were killed in the Russian-Circassian wars between 1763 and 1864 which led to hundreds of thousands of Circassians leaving their homeland for the Caucasus. After a defeat in 1864, Circassians, whose number was estimated to be about 1.5 million, were forced into exile to various countries.