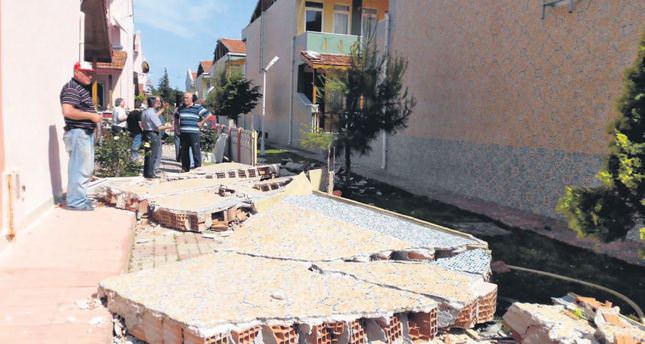 A 6.5-magnitude earthquake injured 267 in Turkey's western and northwestern regions this weekend with worrying high magnitude continuing yesterday, though experts dismissed concerns that the earthquake will set off a greater earthquake

ISTANBUL — A 6.5-magnitude earthquake in the Aegean Sea was felt throughout western and northwestern parts of Turkey as well as Istanbul, the country's most populated city, this weekend.

The earthquake's aftershocks continued yesterday with the largest at a magnitude of 4.8. The tremor injured 267 people but the frightening earthquake will not trigger a major earthquake in Turkey's Marmara region according to experts. A 40-second tremor, whose epicenter in the was Aegean Sea west of Turkish island of Gökçeada and 25 kilometers below the surface, was enough to cause panic in parts Turkey with minor collapses injuring 267 people.

Some panicked residents jumped from the balconies and windows of their multi-story buildings while others suffered heart attacks, although there were no fatalities. Tremors inflicted damage on buildings while a hospital was evaucated due to cracks on its walls.
A total of 70 aftershocks followed within six hours of the earthquake. Two aftershocks were felt yesterday in Istanbul and other cities. Those had magnitudes of 4.8 and 4.5 and rattled western regions nine minutes apart from each other.

Turks, remembering the devastating quake of 1999, worryedly turned to their TV sets to watch the developments. Seismology experts assuaged fears over the oft-cited "major earthquake" that is predicted to hit the Marmara region in the northwestern Turkey. Professor Nurcan Meral Özel, deputy director of Kandilli Observatory and Earthquake Research Institute in Istanbul, told reporters at a press conference it was an earthquake of middle magnitude and will not trigger a "great Marmara earthquake." Professor Ahmet Ercan, a prominent geophysics expert, said the earthquake broke "the wildest fault line." "The earthquake skipped the fault line traversing Istanbul and Tekirdağ and took place on Saros (an inlet of northern Aegean Sea) fault line. It was a shallow earthquake, so it was felt strongly in the west. The fault line's crack is about 40-60 kilometers long and emitted an energy equal to five atomic bombs. I don't expect a greater earthquake after this one. People should be assured that this earthquake will not affect the fault line crossing Istanbul," Ercan said.

Professor Şükrü Ersoy, a geotechnics expert, confirmed that it will not precipitate a greater earthquake and stated it was an "independent" tremor, not "a precursor." "Under normal circumstances, any subsequent earthquake will be smaller in magnitude," he said. Ersoy noted that the Saros inlet was the fault line which has been active for a long time with earthquakes rattling the area in 1912, 1965 and 1985.

Turkey is an earthquake-prone country sitting on several active fault lines. Last year, 25,775 earthquakes occurred in Turkey. According to data provided by the Disaster and Emergency Management Presidency (AFAD), 92 percent of Turkish territory remains under a major earthquake risk.

At least 17,000 people were killed when an earthquake struck the northwest region of the country on Aug. 17, 1999. Turkey stepped up measures to prepare for and deal with earthquakes after the 1999 disaster. Measures included reinforcement of undamaged buildings against earthquakes and the introduction of compulsory earthquake insurance to compensate property losses.
RELATED TOPICS