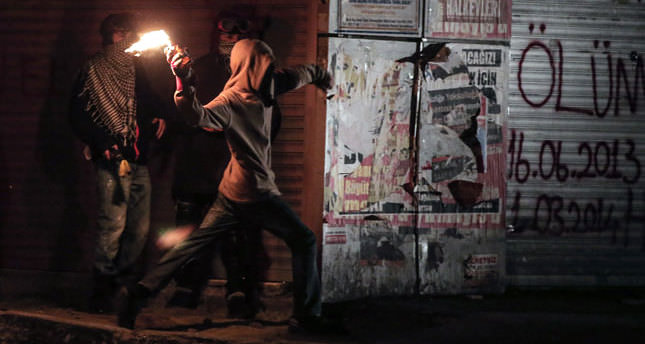 by Daily Sabah May 26, 2014 12:00 am
ANKARA — In response to the increasing use of Molotov cocktails in public disturbances by illegal groups, Prime Minister Erdoğan is considering introducing a bill that classifies it as a "weapon used by terrorist organizations."

The latest riots in Istanbul's Okmeydanı district last Thursday, where Molotov cocktails were widely used against the police, renewed debate on imprisonment of suspects the homemade incenderies.

Under the current laws, throwing Molotov cocktails and inflicting injury or death by them are subject to lengthy prison terms as they are described as "incendiary and explosive materials." For instance, suspects who threw Molotov cocktails in a bus in Istanbul in 2009 that caused the death of a teenage passenger, were sentenced to life. However, courts may interpret the laws differently in conviction of suspects involved in Molotov cocktail attacks and some suspects sentenced to long prison terms are released on bail.

According to the local media, Erdoğan told a meeting of his AK Party members that the events in Okmeydanı were not "protests" but rather "an act of terror." "Molotov cocktail attacks by masked people are acts of terrorism and they will not be allowed," he said, adding that they will be described as "firearms" in new amendments his government planned to pass from the parliament and its sentence will be increased.

The new amendments will likely be included in a new package of laws the government plans to enact in the near future. Reports are circulating that the amendments will describe Molotov cocktail as "a weapon of attack or defense" and possession of Molotov cocktails will be sentenced with prison terms between three to five years. Their use by criminal gangs or terrorist organizations will be subject to heavier sentences. The same package of laws will also criminalize wearing masks during protests and increase sentences for resisting the detention and damaging the public property.

Molotov cocktails also known as firebombs were the subject of debate as to whether people carrying and using them should be charged with terrorism worldwide. A U.S. court sentenced three protesters to prison terms ranging from five to eight years on charges of terrorism for plotting Molotov cocktail attacks in Chicago during a NATO summit in 2012. Normally, a conviction on terror charges may be punishable with life in prison in the U.S.

Along with firecrackers and stones, they are the favorite weapons of rioters in Turkey, particularly those affiliated with terrorist organizations. In the Okmeydanı case, two police officers barely escaped from burning to death when rioters hurled Molotov cocktails in their vehicle in Thursday's riots.
RELATED TOPICS