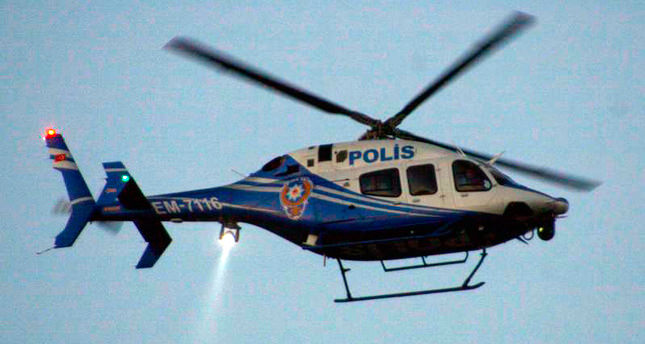 by Anadolu Agency May 26, 2014 12:00 am
ISTANBUL — Supported by the helicopters Istanbul police conduct a major anti-terror operation in Okmeydanı to specific addresses in the early hours of Monday morning.

In operations police seized a large number of ready-to-use molotov cocktails and fireworks and organizational documents in target adresses.

Several people including women were taken into custody after operations in Istanbul's Okmeydani district early Monday.

Several riot police and special operations teams took part in the operations, coordinated by overhead police helicopters, which saw them seize Molotov cocktails and fireworks – which are often launched at police during demonstrations.

Water cannon vehicles were kept on standby and security measures were heightened at Okmeydani.

Two people have died and several have been injured in recent protests. Ugur Kurt, 30, was attending a funeral procession in a prayer house close to the scene of demonstrations when a stray bullet hit him in the head on Thursday afternoon.

Another person, identified as Ayhan Yilmaz, died on Friday of injuries caused by an explosive that blasted near him amid clashes between police and protestors.

The demonstrators were protesting the May 13 deadly coal mine disaster in Soma, western Turkey, as well as the death of an Istanbul teenager, Berkin Elvan, who died in March 2014 after 269 days in a coma caused when he was injured during 2013's Gezi Park protests in Istanbul.