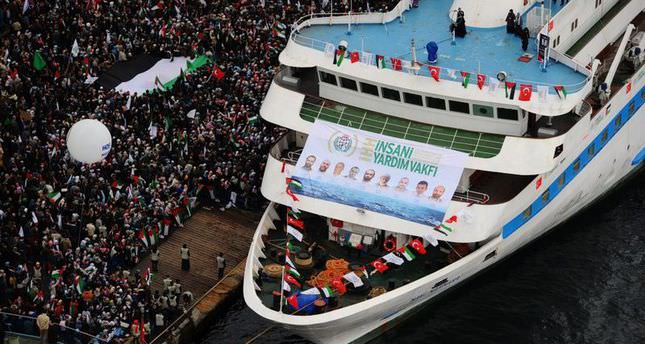 by Daily Sabah May 26, 2014 12:00 am
ISTANBUL — A Turkish court in Istanbul ordered yesterday the arrest of Gavriel Ashkenazi, former Israeli chief of general staff for his role in the Israeli raid on a Turkish aid vessel in 2010 which killed nine Turkish activists. Along with Ashkenazi, the court ordered the arrest for Israeli military intelligence chief Amos Yadlin, air forces intelligence chief Yavishai Levi and navy commander Eliezer Alfred Maron.

Ashkenazi retired from the army in 2011 while other suspects also retired in the past years. Prosecutors seek life sentences for Israelis involved in the raid on charges of inciting murder through cruelty or torture and inciting injury with firearms in reference to activists injured in the raid.

Activists on the Mavi Marmara vessel, part of an international flotilla carrying aid to Gaza, were killed when Israeli commandos stormed the ship in international waters. Uğur Süleyman Söylemez, a tenth activist injured in the raid, died last week after he spent four years in coma.

Israel initially justified the attack but in 2012, it offered an apology and offered a compensation of $20 million to the families of Turkish activists died aboard the vessel. Turkey and Israel launched talks on a compensation deal last year.

The attack badly damaged Turkish-Israeli relations and both countries virtually cut off their long-standing ties. Relations are not expected to see a thaw in the near future as Turkey is also demands Israel lift blockade on the Gaza Strip, a condition Israel sternly rejects.

The fourth anniversary of the attacks will be commemorated by the Humanitarian Aid Foundation (İHH) that organized the aid flotilla with a march in Istanbul that will conclude in Sarayburnu where the Mavi Marmara vessel departed for Gaza.
Last Update: May 26, 2014 9:55 pm
RELATED TOPICS