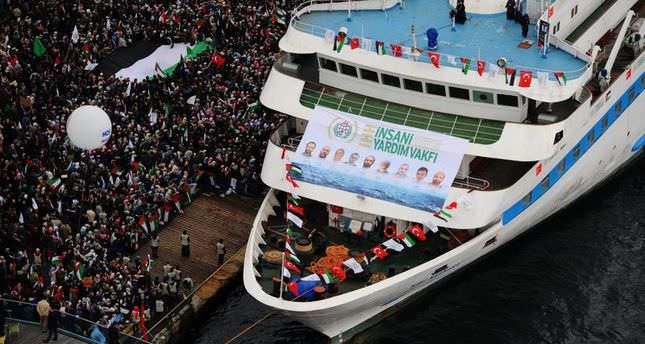 by AA May 27, 2014 12:00 am
ISTANBUL — Turkish survivor of the Mavi Marmara raid by Israelis in 2010 welcomed the order by a Turkish court for the arrest of 4 Israeli officials held responsible for the attack.

Musa Cogaş, a member of the Turkish NGO Humanitarian Relief Foundation (IHH) who was on the Mavi Marmara when it was attacked, told AA, "I was shot both in my arms and back during the raid by an Israeli soldier without any warning. We are pleased with the verdict. The apology and compensation don't mean much to us. We also lost Suleyman Ugur Soylemez a few days ago, one of those martyred in the attack."

The Turkish court ordered the arrest of four Israeli officials who authorized and ordered the raid, and an INTERPOL red notice was issued for the officials, who neither attended the trial nor responded to the summons sent for them.

The deadly raid in 2010 led to international outrage and soured Turkish-Israeli ties. Last year under compulsion from the U.S., Israeli Prime Minister Benjamin Netanyahu offered an apology to Turkey during a phone conversation with Turkish Prime Minister Recep Tayyip Erdoğan.