Turkish-Russian cooperation a must for regional stability 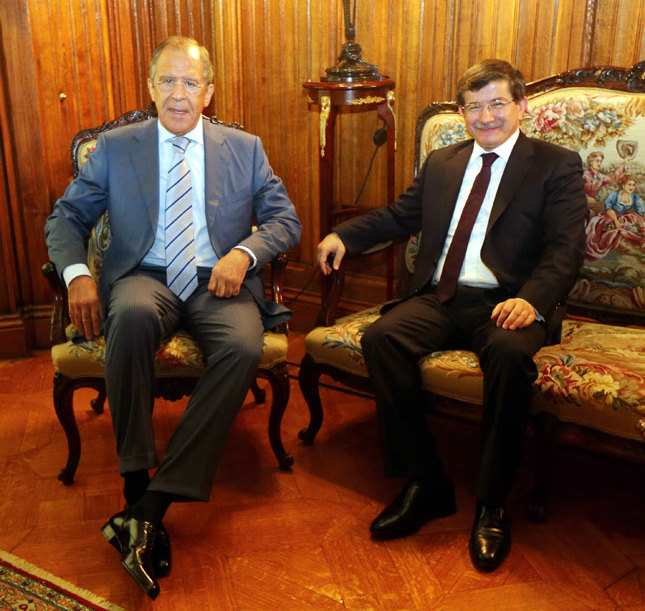 The finance minister was speaking yesterday at the fourth meeting of Turkish-Russian Joint Strategic Planning Group, a sub-organization for the meetings of high-level cooperation council between Turkey and Russia to evaluate critical political issues to maintain regional stability.

FM Davutoğlu met with his Russian counterpart, Foreign Minister Sergey Lavrov, to exchange views on the recent developments in Ukraine and Syria as well as the Iranian nuclear program along with bilateral relations.

In a joint press conference, Davutoğlu, said that bilateral relations have been gradually improving after holding meetings on joint strategic planning groups despite a divergence over the regional and international developments. Regarding the latest developments in Ukraine, since violent clashes between Kiev forces and pro-Russian groups broke out, the Turkish government has supported Ukraine's territorial integrity against the violent separatist attacks.

Turkey, along with the international community, condemned Russian annexation of Crimea that escalated ongoing tensions between Russian and the West.

"Crimean Tatars are the main ethnic group living in that region. Turkey has given the utmost importance to provide peace in Crimean Tatar's homeland... The most important thing is that Crimean Tatars, a multi-cultural ethnic community living in the Crimean peninsula for many years should live together with the other groups peacefully." said Davutoğlu about the situation of Crimean Tatars. "This would prove that Russian-Ukraine dialogue is a key factor for the sustainable regional stability which in return, has a profound impact on Turkish-Russian relations."

According to AA reports, Davutoğlu underscored the importance of their evaluation on significant regional issues, adding that "We would be happy to focus on actual problems in the Middle East, North Africa, and the Black Sea region. Ukraine is our neighbor and we would also point to the ongoing problems in Ukraine."

Russian Foreign Minister Lavrov also pointed out that the cooperation council, a key aspect in improving the bilateral relations, would provide a great opportunity for future relations between two countries.

Lavrov continued saying that the current regional issue; the mutual cooperation in Ukraine, Black Sea and North Caucasus were the major topics in the discussions.

Regarding both leaders' opposing stance over the regional developments, it is important to note that enhancing the current bilateral relations increases the possibility of achieving a common ground to prevent the political differences from deteriorating. It is widely believed Poroshenko's victory in the Ukrainian election and his calling for negotiations with the Russian government will lead to tension easing in the region, thereby bringing more stability. "We respect the will of Ukrainians," said Russian FM Lavrov adding the necessity of national dialogue for the stability in Ukraine.

Apart from regional issues, Turkey and Russia have long prioritized their economic and trade relations. Since 2003, bilateral relations have improved through the assertive Turkish foreign policies made by the ruling Justice and Development Party (AKP). Since then, the high level of economic relations have been of crucial importance for the development of Turkish-Russian ties. The two important components of the bilateral relations is both energy deals and growing trade volume between the two countries.
Last Update: May 27, 2014 10:15 pm
RELATED TOPICS