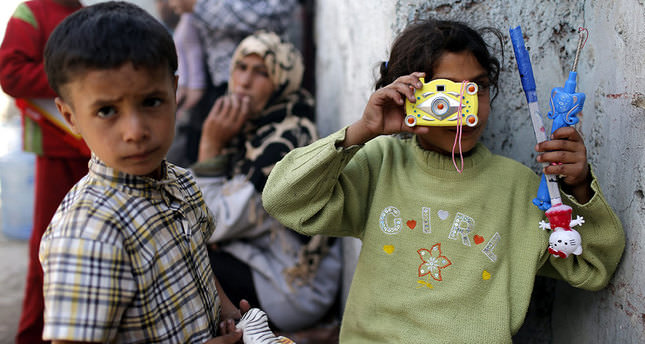 by AA May 29, 2014 12:00 am
ALEPPO, Syria — A rising number of air strikes by Syrian regime forces have led to more Syrians fleeing to Turkey - with almost 4,500 crossing the border in last three days through southeastern Cilvegozu border gates.

Sixty Syrians who sustained injuries in the attacks in Idlib and Aleppo were brought in over the last three days through the same border.
More than 100,000 shelter-seekers had been streaming into Turkey through the Cilvegözü border crossing with Syria in the first four months of this year, officials had said Monday.

At least 100,000 deaths were recorded in the U.N.'s last official count in July 2013. In January, the U.N. announced it had stopped updating the death toll because an official count had become too difficult to verify.

As the daily clashes between Syrian regime forces and opposition groups continue to claim lives, a large number of Syrians have been forced to flee the country into neighboring countries including Turkey, Lebanon and Iraq, where more than two and a half million are now registered as refugees.

The fighting, which entered its fourth year in March, has also internally displaced more than 6.5 million people.