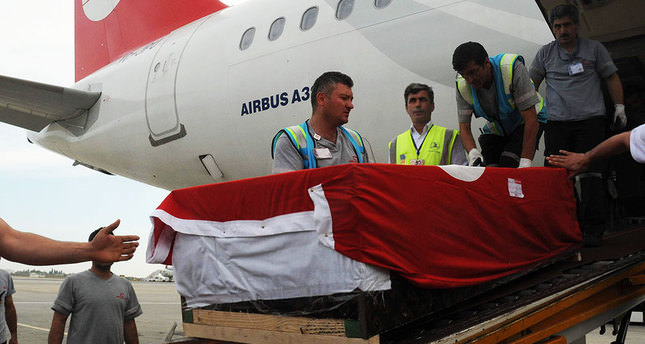 by AA May 29, 2014 12:00 am
ISTANBUL — A Turkish Airlines security chief who was killed in an attack in Somali capital Mogadishu has been brought back to Istanbul for burial.

Sadettin Doğan, the head of the Somali branch of a company which provides security services to Turkey's flag-carrier Turkish Airlines, was shot dead on Tuesday in an attack by unidentified gunmen.

Chief executive of the security company, Ahmet Çetin said the attackers approached in a vehicle to block the path of a car carrying Doğan and members of his team before the attackers began shooting at them.

A former member of the Turkish navy's special operations unit, Doğan had been leading the Turkish Airlines security team in Somali for two years.

Çetin said those wounded were taken to hospital but Doğan couldn't survive a bullet to his heart. He will be buried on Thursday after midday in Çengelköy Cemetery, in Istanbul.

Çetin added that the attack looked like an ambush but there has been no claim of responsibility.

Turkey's Foreign Ministry has denounced the "vicious" attack and called on Somali officials to bring the perpetrators to account as soon as possible.

On April 10, two other Turkish nationals were injured during an attack on the Turkish Embassy in Mogadishu.