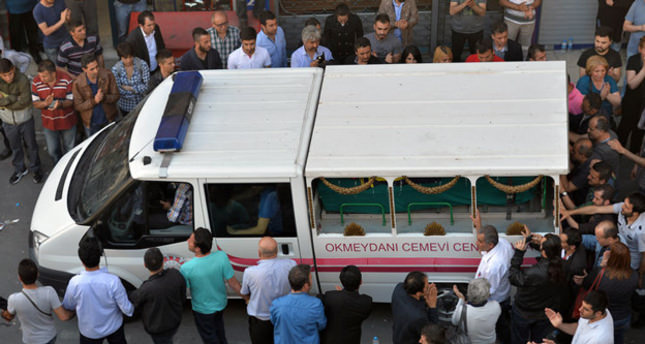 by Daily Sabah May 29, 2014 12:00 am
ISTANBUL — The prosecutor's office in Istanbul announced that a bullet from a policeman's gun killed Uğur Kurt, a passerby, during violent riots on May 22 in Istanbul's Okmeydanı district. The prosecutor asked for authorization from the Istanbul governorate which oversees law enforcement to question the police officer.

As of yet the identity of the police officer has not been disclosed due to security concerns. Pistols of 14 police officers were confiscated following the shooting of 30-year-old Kurt for ballistic examination.

Kurt, a father of one, was at a cemevi – an Alevi prayer house – near the site of violent riots when a bullet hit him in the head on Thursday. He succumbed to his wounds the next day at the hospital. He was one of two victims killed in the riots. Ayhan Yılmaz, another passerby, was killed when rioters hurled a homemade fragmentation grenade at riot police.

Riots followed an anti-government protest in Okmeydanı, a working-class district on the European side of Istanbul. Masked protesters armed with Molotov cocktails, stones and homemade explosives engaged in clashes with riot police seeking to disperse them. After the shooting of Kurt, a video emerged showing a police officer firing into air as an angry mob attempting to torch his vehicle surrounded him. It is not known whether he fired the bullet that killed Kurt.

Government officials condemning the riots claimed the unrest – which began as a protest over the mining tragedy in Soma – sought to sow tensions between Sunnis and Alevis as Kurt is an Alevi and Okmeydanı has seen similar riots around the cemevi where he was killed. Several Alevi organizations last week protested against the government over "a campaign of injustice" against the Alevi community.

Speaking to Uğur Kurt's family, Prime Minister Recep Tayyip Erdoğan pledged that suspects in the killing of the young man would be found.