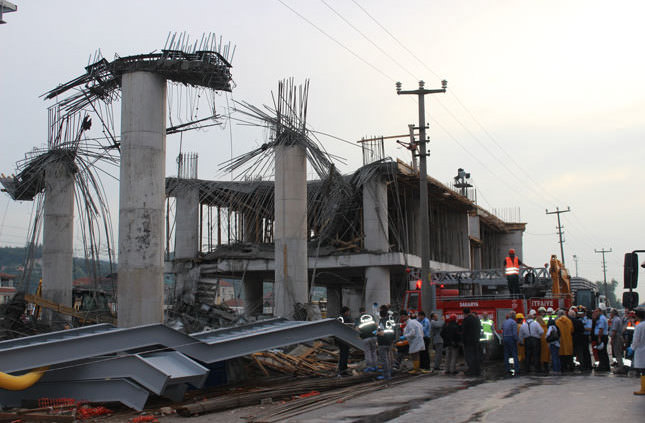 SAKARYA — At least five people were injured Thursday when a train station under construction collapsed in northern Turkey.

The collapse occured during concreting works at the two-storey station building in the Arifiye district of Sakarya province, which was being built as part of Turkey's major high-speed rail project to link its capital Ankara with its largest city of Istanbul

The five workers stuck under the rubble were rescued wounded and taken to hospital, medical sources said.

Fire brigades from the Sakarya Metropolitan Municipality along with disaster and emergency rescue teams were continuing their rescue efforts in case there might be more workers trapped in the debris, Anadolu Agency correspondents reported from the scene.

Turkish State Railways had announced in January that it would invest almost half of its 2014 budget (1.8 billion liras) in high-speed trains, as part of a wide array of construction projects planned for Turkey's founding anniversary in 2023.

There are currently three high-speed rail lines between Ankara, Konya and Eskisehir, all central Anatolian provinces.

The official launch of the Ankara-Istanbul line was delayed to the end of June due to sabotage attempts, Turkey's Transport Minister Lutfi Elvan told Anadolu Agency on Tuesday.