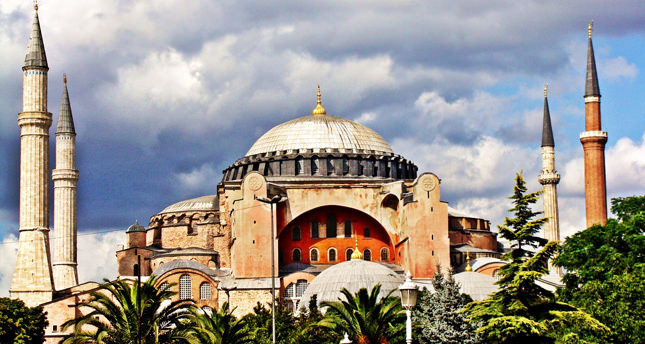 by Daily Sabah May 30, 2014 12:00 am
ISTANBUL — The Anatolian Youth Organization, a local nongovernmental organization, announced that they would perform prayers in Istanbul's Hagia Sophia, a former church and mosque that is now a museum. The group plans to perform dawn prayers on Saturday morning. Abdullah Basfar, a Saudi imam, will lead the prayers.

Performing religious prayers at the Hagia Sophia, which was converted into a museum in 1935 is prohibited although numerous groups have called for its reopening as a mosque recently. Originally constructed in 537 as a Greek Orthodox Church, it was converted into a mosque after Istanbul's conquest by Ottomans. It remained a mosque until 1931 when it was closed to the public for four years and reopened as a museum.

Anatolian Youth Organization President Salih Turhan told reporters that seeing Hagia Sophia as a museum "hurt" Muslims. "It is our duty to convert it back to its original state [a mosque] to show Islam's prevalence in this region and carry out the nation's will."