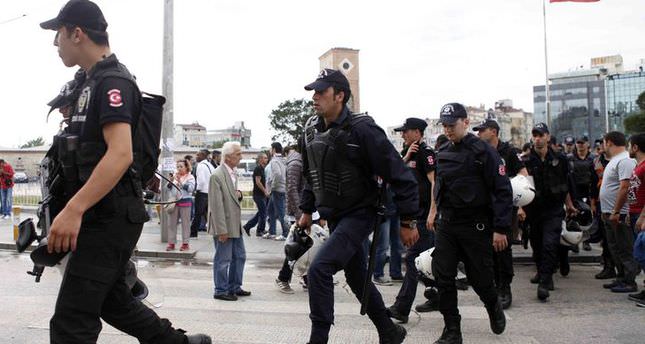 by AA May 31, 2014 12:00 am
ISTANBUL — Police used tear gas Saturday to disperse protester groups near Taksim who tried to reach the square to mark the anniversary of last year's Gezi Park protests.

After calls from Taksim Solidarity Group for mass protests on the first anniversary of the start of the Gezi Park protests, riot police have taken strict security measures around the Taksim Square, which was the center point in the last year's demonstration which later mushroomed into mass anti-government protests across the country, resulting in the deaths of eight people, including a police officer.

Putting up barricades, riot police closed roads including Istiklal Street to block access to the Taksim Square, whereas only reporters are allowed into the square.

The security forces intervened against groups who gathered near Istiklal and Okmeydani to march towards Taksim while chanting slogans.

Several deputies from Turkey's main opposition Republican People's Party (CHP) and People's Democratic Party (HDP), who were among the groups, demanded from the police forces to let the march to the square.

After police did not allow the march, the groups clashed with the security forces and tried to break the barricade. In return, riot police dispersed them by using tear gas and water cannon.

Some shops near the area were damaged during the clashes, and 5 more people have been detained by police forces.

Earlier this afternoon, 16 others were taken into custody as they insisted on their march to Taksim Square.

Police helicopters are also patrolling over the region.

Meanwhile, around 150 protesters in Okmeydani district blocked the traffic on Piyalepasa Street and chanted slogans.

After the police intervened, the protesters threw stones, fireworks and molotov cocktails at them.

The street is still closed to traffic due to security concerns.

Earlier in the day, all ferry lines from Istanbul's Anatolian side to the European side were cancelled as part of the security measures.

In total, around 25,000 police officers are on duty today in the districts Taksim, Besiktas, Dolmabahce, Sisli and Okmeydani.

Several groups and NGOs gathered in Kizilay and blocked the traffic.

After they ignored the calls to disband, riot police intervened with water cannons to which the protesters responded with fireworks and stones.

The Gezi Park protests began as a small environmental demonstration on May 31, 2013, and turned into nationwide anti-government demonstrations. The protests erupted after the government moved to implement a redevelopment plan for nearby Taksim Square which reportedly included replacing part of Gezi Park with a mall.
Last Update: May 31, 2014 10:38 pm
RELATED TOPICS