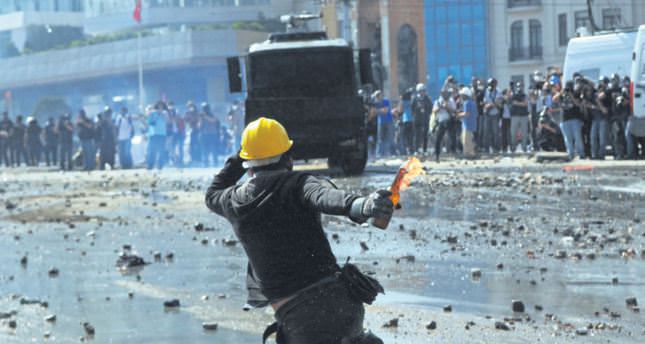 by Daily Sabah May 31, 2014 12:00 am
ISTANBUL — Rather than celebrating the peaceful start of the Gezi Park demonstrations on May 27, the Taksim Solidarity Platform is opting to mark the first anniversary of the start of violent clashes on May 31. About 25,000 police officers will be on guard to make sure protests don't get out of hand and prevent anyone from entering Taksim Square.

Taksim Solidarity Platform, the movement which started a protest against the redevelopment of Istanbul's Gezi Park last year, has insisted on marking the Gezi Park incidents' first anniversary on May 31, the day the riots broke out, instead of May 27 when the peaceful demonstrations commenced.

On the anniversary, Turkish police are planning to take strict security measures against expected riots. Istanbul police announced that 25,000 policemen and 50 armored vehicles equipped with water cannons will be deployed in Taksim Square and its vicinity on May 31. The square will not be closed to access but any group of protesters will not be allowed to rally at the square. Streets leading to the square will also be closed off to protesters.

On Thursday, Gezi Park was closed briefly. It was reported that the park was shut down on a tip-off regarding a planned rally at the site. Making a statement earlier this week, Taksim Solidarity Platform's representative Mücella Yapıcı said Gezi Park was "not a concluded process." Members of the platform said that they would be at Taksim Square on May 31. Protests over alleged plans for the demolition of Gezi Park, adjacent to Istanbul's renowned Taksim Square, sparked protests on May 27, 2013. Soon, the small group of environmentalists were joined by more activists and turned into what its supporters called the "Gezi resistance." However, the demonstration also attracted radical groups opposing government policies. On May 31, riot police intervened to evacuate the park where protesters have been camping for days. The intervention, later acknowledged as "disproportionate", played into rioters' hands, who engaged in clashes with security forces at Taksim Square.
Last Update: May 31, 2014 5:45 pm
RELATED TOPICS