Mothers determined to get back their children from PKK's clutches 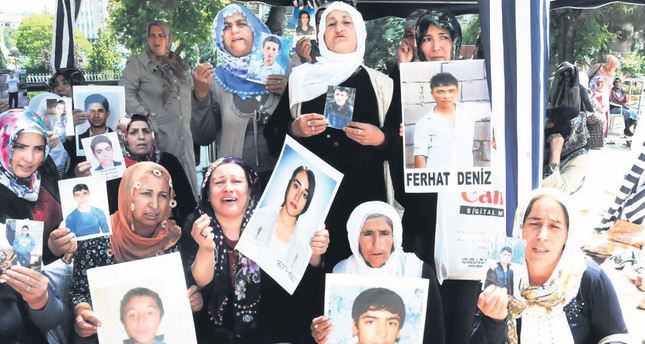 ISTANBUL — Families of Kurdish children "abducted" or forcibly recruited by the terrorist organization PKK were on the 11th day of their sit-in in the city of Diyarbakır on Friday for the return of their children. Both the government and an opposition party vowed to bring them back but families decided to continue their protest on June 1, World Children's Day. A total of 65 women took part in the protest outside the Diyarbakır Municipality. Gathered in a tent decorated with banners bearing slogans calling for their sons and daughters' return, protesters, mostly women, spent the day crying, talking to reporters and admiring photos of children and teenagers whose ages range from 12 to 23.
Selahattin Demirtaş, co-chairman of the Peace and Democracy Party (BDP), met with families earlier and vowed to hold talks with PKK figures to ensure the return of recruits while Prime Minister Recep Tayyip Erdoğan stated the government would take "measures" if the BDP failed to do so, hinting at a military operation. The families' protest was later joined by other families from various cities whose children were kidnapped by the PKK.

Those who could not travel to Diyarbakır also raised their voices against the terrorist organization. Six families in the western city of İzmir, two in Istanbul, one family in the southeastern city of Bitlis and two in Adıyaman appealled to authorities to retrieve their children.
Arzu Kahraman and Ruken Yıldız, two high school students from the southeastern Turkish province of Adıyaman, went missing on May 5. Their families claim they were "abducted" by the PKK. Speaking to Anadolu Agency, Zeynep Yıldız, mother of Ruken, said her daughter was deceived. She said her daughter was studying in preparation for university exams. "I beg people to have them returned. They are too young. My daughter was a successful student. She wanted to be a doctor. I don't believe someone pursuing a university degree would join (the PKK)," she said. Yıldız called on the prime minister and Demirtaş to help for their return. Zahide Kahraman, mother of Arzu, said she was "grieving." She claimed her daughter would never think about joining the terrorist organization.

The PKK is accused of recruiting children and teenagers with the assistance of its supporters all across the country. In Diyarbakır, secondary school students attending a picnic organized by a local nongovernmental organization linked to the PKK, were allegedly persuaded into joining the terrorist organization. The PKK is also employing private Kurdish classes to brainwash children into joining them, according to the security forces. Turkish media have reported that 39 people from İzmir, including four below the age of 18, joined the organization in one year while eight students who fled home to join the militants were found by the police in the western province of Manisa in April and May.

Reports in the Turkish media claim 700 children or those under the age of 18, age of consent, were forcibly recruited by the terrorist organization since 2013. The PKK turns to younger militants as it has difficulty finding support for its activities in the wake of government's reconciliation process to end the conflict. Speaking to Anadolu Agency (AA), Mustafa Juma, a senior official with Syria Kurdistan Democrat Party, a rival to Syria's PKK-affiliated Democratic Union Party (PYD), said some children abducted in Turkey underwent combat training in Syria. "It is possible that they would use them in their fight against Islamic State of Iraq and the Levant (ISIL)," he said, referring to the radical terrorist group fighting Kurdish militants in Syria. "We know some of those children are taken to Rojava (a northern Syrian town dominated by Kurds) and others are trained in Qandil (mountainous region in the northern Iraq where PKK is based)," he said. "We have information that PYD employs girls as young as 12 in Rojava in its fight against other insurgent groups whereas it is forbidden to use children in armed conflicts," Juma stated.

The abductions drew the ire of Turkish politicians who denounced the practice of training child militants. Cuma İçten, a Diyarbakır lawmaker from the ruling AK Party, said a 15-year-old child cannot have "a free political will" contrary to statements by the terrorist organization. He claimed there were thousands of children recruited by the terrorist organization according to unofficial figures. Praising the mothers' protest, İçten said, "It is the first time in 30 years that mothers took a brave stand against the PKK. It is a repercussion of the reconciliation process," İçten said.

The reconciliation process is a government initiative to end PKK terrorism that started in the 1980s and caused the deaths of thousands in attacks targeting security forces and civilians. "Those mothers saw (terror attacks) ceased and wondered why their children are kidnapped when there is peace," he said. The PKK had declared a de facto truce following the start of the reconciliation process and withdrew its militants from Turkish territories although it did not pull out from Turkey entirely under the pretext that the government was reluctant to pursue the process effectively. "This raises questions whether those children are brought to Syria to fight in the conflict there," İçten added. On the other hand, Selahattin Demirtaş of the BDP claims it is government's responsibility to have the children back and accused the government of politicizing the issue. Denouncing the prime minister's remarks implying a military operation, Demirtaş said BDP worked to end the killings.
RELATED TOPICS