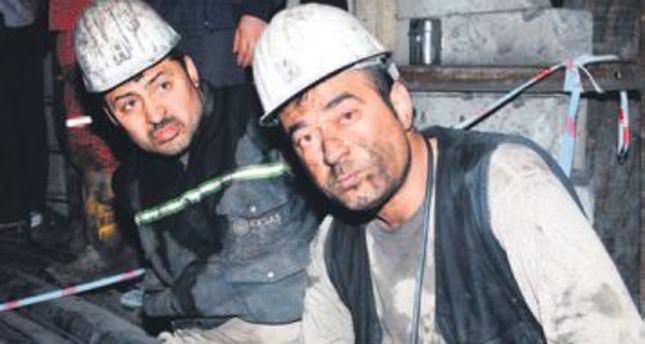 by Daily Sabah May 31, 2014 12:00 am
ISTANBUL — After a devastating coal mine accident in Soma, leading to the death of 301 miners on May 13, authorities are taking steps to provide for a safer and healthier work place in mines. To reach this goal, a draft bill has been sent to the Parliament which covers new regulations in the subcontracting and mining sector. According to the new rules, miners' retirement age will be lowered to 43 from 55. The bill also regulates the weekly working hours in accordance with EU standards. If the draft bill comes into force, weekly working hours will be decreased to 38 from 45 and daily working hours in tunnels will be limited to six hours. The bill also suggests that in the event of an accident, the state and companies that own mines will jointly pay the salaries of the workers for the duration of the mine's closure.

Moreover, the bill stipulates that mine workers will receive onesalary- premium payments every other month. AK Party deputy chairman Nurettin Canikli, stated that the bill will ban employing contract labors (subcontractor) in mines apart from assisted services and high-tech sections. "I have been informed that there are 100,000 contract laborers working in public institutions. Once the bill enters into force those workers can be tenured following an examination.

According to Turkish media outlets, Prime Minister Recep Tayyip Erdoğan spoke with high-ranking officials from the Social Security Institution, who highlighted that the new regulations regarding the mining sector would place an extra burden on the treasury. Turkey's mainstream media reported that in his answer to officials' remarks, Erdoğan chided them, and stated that he had once entered a coal mine tunnel and the working conditions were quite challenging. The prime minister alledegly said, "If you go there, you can easily realize what I
mean."
Last Update: May 31, 2014 1:51 am
RELATED TOPICS