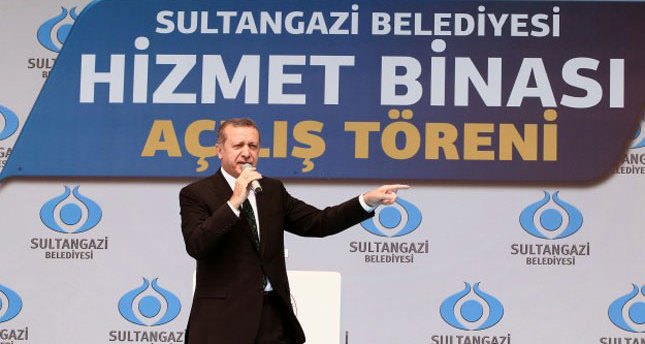 by AA May 31, 2014 12:00 am
ISTANBUL — Turkish police will prevent any unlawful demonstration on Saturday to mark the anniversary of last year's Gezi Park protests, Prime Minister Recep Tayyip Erdogan said.

"Our security forces have clear orders. What is necessary will be done from A to Z," Erdogan said at the opening of a municipal complex in Istanbul on Saturday.

The Taksim Solidarity -- an umbrella group of protesters -- has called for a rally in Taksim near the Gezi Park, a leafy park in the heart of the city.

The original Gezi Park protests began as a small environmental demonstration on May 31, 2013, and mushroomed into nationwide anti-government demonstrations in the subsequent months.

Erdogan termed the protest call made by the Taksim Solidarity Group as a "trap" and urged the youth to stay out of the Taksim Square for Saturday evening.

Criticizing the opposition parties, Erdogan said, "While we are trying to solve all problems within the restraints of democracy, the opposition is trying to get assistance from terrorist organizations to disturb the peace in the country."

He called on the opposition to be "more industrious and productive than the ruling party" to gain the confidence of the people instead of adopting unethical means to come to power.

Accusing the opposition of cooperating with terrorist groups, he warned that those responsible for the December 17 and 25 operations would be held accountable for their actions and that the government had strong evidence against them.

The Turkish government has accused a movement led by U.S.-based preacher Fethullah Gulen of plotting to overthrow the government by using an illegal group nestled within key institutions of the state such as the police and the judiciary.

The group, dubbed the "parallel state", is allegedly behind a number of operations including illegal wiretappings of thousands of people.