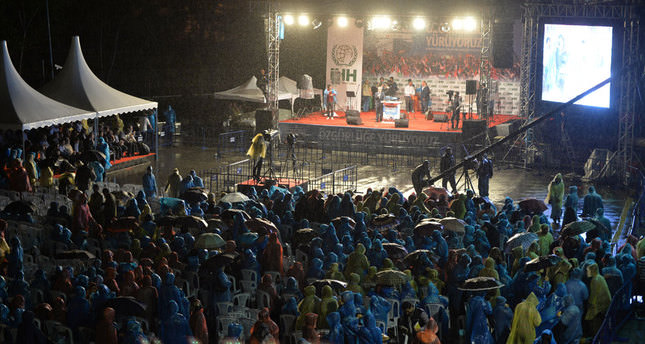 by AA Jun 01, 2014 12:00 am
ISTANBUL — Tens of thousands gathered in Istanbul on Saturday for "Al-Quds and Al-Aqsa Mosque March" held by Turkish charity Humanitarian Relief Foundation to commemorate 10 victims of a deadly Israeli raid in international waters on a Gaza-bound aid ship in May 2010.

The march began afternoon from the Sultanahmet courtyard to the Sarayburnu port - where the attacked Mavi Marmara ship is anchored - on the fourth anniversary of the attack.

The people attending the march chanted slogans in protest of Israel while carrying flags of Palestine, Syria, Egypt and Turkey.

During his remarks following the march, the foundation's chairman Bülent Yıldırım said the Mavi Marmara, as a "fleet for freedom" consisting of "conscientious people" from all religions and nationalities, embarked on its journey four years ago with the aim of breaking the siege and embargo on Gaza.

He reminded that a Turkish court on Monday ordered the arrest of four former senior Israeli military officers on a charge of having responsibility for the deadly assault on the humanitarian aid ship.

"We wiped off the mentality that Israel cannot be judged," he said while thanking the "brave judges" hearing the trial.

The sixth hearing in the Mavi Marmara trial was held in Istanbul's Seventh High Criminal Court on Monday. The Turkish court ordered the arrest of the four Israeli officials who authorized and ordered the raid.

Yıldırım went on to say that this day is a message for Israel that the foundation will not forget Mavi Marmara and will not let it be forgotten.

"Israel needs to reconcile with Turkey in any means. Thanks to Turkey's strong stance, we believe the aid flow into all Palestine via Turkey will be open," he added.