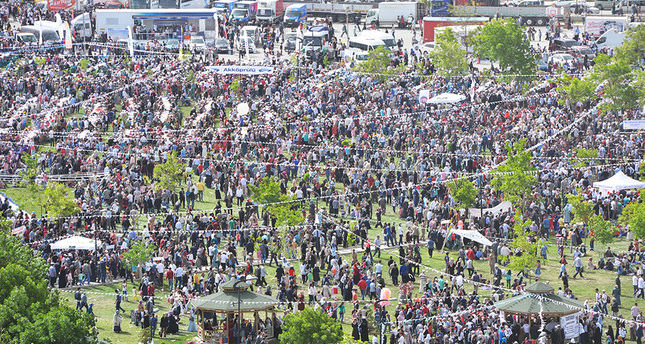 by AA
Jun 01, 2014 12:00 am
VAN, Turkey — The Guinness record for "World's most crowded breakfast table" was broken on Sunday as a total of 51,793 people enjoyed a morning meal in the eastern province of Van.

"Van set a world record for the most crowded table, surpassing the one belonging to the U.S. with 18,941 people," said Guinness representative in Turkey, Seyda Subaşı Gemici.

Tens of thousands of people passed through a total of twenty turnstiles - in order for the count to be accurate - to attend the event, which was organized by the Chamber of Commerce and Industry.

At 9 a.m., as people wearing local dresses sang and danced, they were then able to enjoy breakfast under the watchful eye of the Guinness representative.

In order to break the record, 25,000 chairs and 6,000 tables were set up in a field. Those who failed to find a table brought their own tablecloths to sit on the ground.

"We set a table for peace and fraternity," said President of the Chamber of Commerce and Industry, Necdet Takva as thanked all participants at the end of the event.