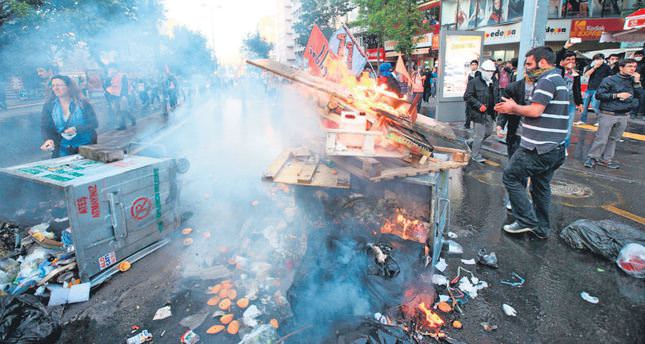 Disillusioned with the violent turn in the demonstrations, only a few thousand die-hards turned up on Saturday near Taksim Square to mark the first anniversary of the Gezi Park protests

ISTANBUL — Relatively sunny weather and hype in social media fell flat in convincing backers of last year's Gezi Park protests in Istanbul to take to the streets on the riots' first anniversary on Saturday.

Save for a few well-publicized incidents, the events, which soon escalated into violence, were far from the intensity of the 2013 protests. It is not clear whether the protesters who have been calling for mass rallies in the storied park, which was viewed as a stronghold of Gezi Park "resistance," and the adjacent Taksim Square were intimidated by the massive police presence or simply could not manage to garner significant support as was the case in 2013. During the protests, some police officers demanded to see CNN reporter Ivan Watson's press credentials and later apologized for any inconvenience.

Police officers' ID check of the CNN crew and the alleged detention of Watson in Taksim caused outrage among critics of police brutality, but it was later revealed that Watson was merely asked to produce his passport and held for about 30 minutes after his passport was brought from the nearby CNN office. In a statement, CNN International said police officers apologized to Watson for the brief scuffle during the ID check.

Another highlight of the Gezi anniversary was Sırrı Süreyya Önder, an opposition lawmaker who made headlines when he confronted a bulldozer advancing to Gezi Park to remove trees. Önder, who was surrounded by environmental activists last year, was alone this time as he silently left a bunch of flowers on the stairs leading to the park in memory of people who died in the 2013 protests. In the absence of "peaceful" protesters who originally launched last summer's movement, radical groups took center stage in Saturday's events. Clashing with police in Istanbul districts near Taksim Square and other neighborhoods, rioters affiliated with terrorist organizations, such as the Revolutionary People's Party-Front (DHKP-C), tossed Molotov cocktails and stones at police. In the Eyüp district, a policeman suffered burns from a Molotov cocktail, while another was shot in the arm. In the Beyoğlu district where Taksim Square is located, a policeman intervening in the riots broke his arm.

Occasional riots by supporters of terrorist organizations continued throughout the night. Masked rioters stopped traffic on TEM, a major highway of Istanbul, after they forced two truck drivers to hand over their keys. Istanbul police detained over 120 people involved in the riots, while city police chief Selami Altınok said it was "a peaceful day." "Participation in the protests was not high. I thank everyone (not involved in riots)," he said.

Events to mark the anniversary of the Gezi Park "riots" were not confined to Istanbul, as other cities saw small-scale events as well unlike last year's mass rallies. In the western city of İzmir where the Gezi Park "resistance" has significant support, about 1,000 people joined a march in memory of protesters that died in last year's riots and chanted slogans against the government.

Lawmakers from the opposition Republican People's Party (CHP), a primary supporter of the Gezi Park protests, attended the rally in İzmir. At least 50 people were detained in İzmir when some protesters refused to end the unauthorized rallies.

Riot police also intervened in a group of protesters hurling stones at them in the southern province of Hatay. In the central province of Sivas, the Gezi anniversary was marked by about 100 people who dispersed uneventfully after reading an anti-government manifesto.
RELATED TOPICS