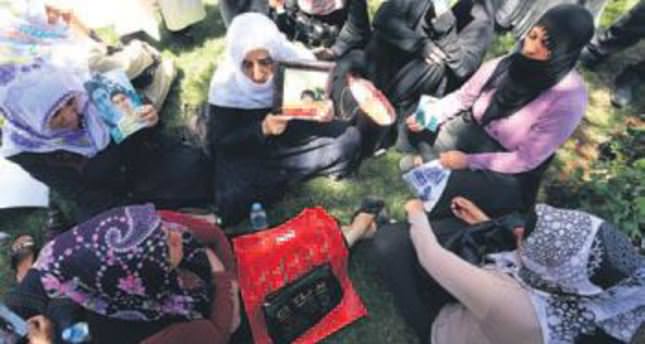 by Daily Sabah Jun 02, 2014 12:00 am
ISTANBUL — A sit-in protest by Kurdish mothers in the southeastern province of Diyarbakır did not end on June 1 as planned, because families had not yet heard from their children forcibly recruited by the terrorist PKK. The mothers now also face the threat of evacuation from the spot they are holding their protest in front of the Diyarbakır Municipality.

However, some families left voluntarily after they were reportedly threatened by PKK supporters. The Kurdish mothers' protest reached its 12th day yesterday. In an unprecedented protest, the demonstration was the first mass civilian resistance against the terrorist organization in the region.

Though it did not lose steam, the Diyarbakır Municipality forced the protestors to change their site of demonstration. The municipality asked protesters to leave the area to make way for "cleaning" of the site by workers. Tents set up by parents were forcibly removed by municipal officials on Saturday after two mothers who started the protest left and other families moved in. Refusing to leave the site, families relocated to the median across from the city hall. Currently, 75 families are staging the sit-in.

Meanwhile, the government continues to support the families. Deputy Prime Minister Emrullah İşler said the sit-in was "a milestone" in the government's efforts for reconciliation to end PKK terrorism and restore the rights of the oft-neglected Kurdish community. "There is no turning back for the reconciliation process," İşler added. It is estimated that the PKK has 2,350 children in its ranks according to the unofficial figures.
RELATED TOPICS