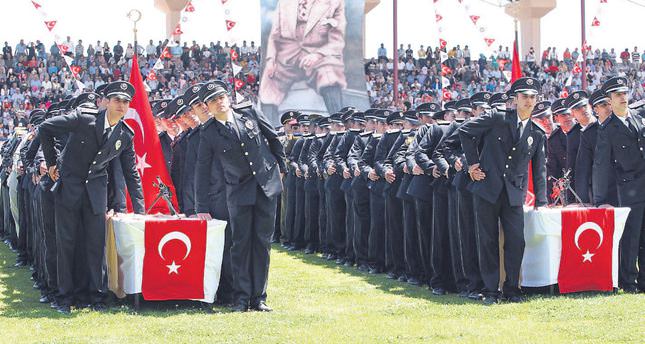 by Mehmet Ali Berber Jun 02, 2014 12:00 am
ISTANBUL — The police training process in Turkey will undergo a major overhaul under the government's plans to reform police academies and police chiefs against infiltration by Gülenists. Under the new plan, the Institute of Security Sciences, a section of the police academy where police chiefs are trained, will be shut down and replaced with a one-semester school while vocational police schools training low-ranking policemen will be replaced with six-month training centers. According to sources close to the government, Prime Minister Recep Tayyip Erdoğan approved the reform plans and instructed authorities to analyze police training mechanisms in EU member states.


The Institute of Security Sciences, which provides a four-year education for training police chiefs, will be converted to a one-year training center. The center will offer vocational training for policemen seeking a promotion in rank and university graduates selected among those who scored high in the Public Personnel Selection Exam (KPSS), an exam originally designed for hiring of civil servants.

Police vocational colleges, the main training facilities for entry-level policemen, will be converted into centers where cadets will undergo a six-month training period instead of a two-year education.

Academics working at the police academy will be reassigned to other universities under the planned reforms.

A report presented to the Prime Ministry by government officials criticizes police training in Turkey and describes it as a system boggled with bureaucracy and tutelage of some groups, implying the Gülen Movement's followers.

The Gülen Movement, led by U.S.-based shadowy cleric Fethullah Gülen, launched a campaign to discredit the AK Party government on Dec.17, when an anti-corruption probe targeting individuals close to the government, including sons of three former ministers, was initiated by prosecutors and police officials linked to the movement.

Those officials are accused of illegally wiretapping people critical of the movement through forged warrants.

Gülenists wield significant influence in the judiciary and police due to years of infiltration by the movement's followers.

They are accused of facilitating promotion of police officers loyal to them by helping them to cheat in promotion exams. A voice recording leaked to Turkish media in April revealed a Gülenist scheme to help their loyalists pass a 2011 exam for the police vocational school (POMEM).

In the recording, allegedly recorded at the Police Directorate headquarters in Ankara, a man instructed other supposed fellow Gülenists to infiltrate their way into the law enforcement. The man, who claimed to be head of police training services, told Gülenist officers overseeing the exam how to help police hopefuls to cheat.
RELATED TOPICS