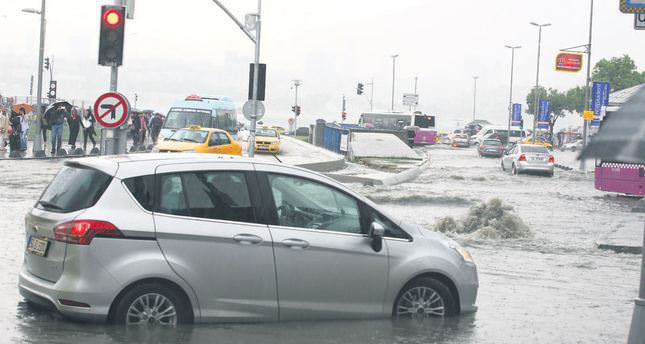 by Daily Sabah Jun 04, 2014 12:00 am
ISTANBUL — Some streets and buildings in Turkey's most populated city were inundated with floodwaters and rainfall. Coinciding with evening rush hour, the downpour paralyzed daily life and led to lengthy traffic snarls. Large hail affected some parts of the city as well.
The district of Üsküdar on the Asian side bore the brunt of the rainfall.

The sea level on the seaside district rose to land level and saw sea water overflowing onto adjacent roads. On the European side, the districts including Bağcılar, Bayrampaşa, Halkalı, Esenler, Beşiktaş, Sarıyer and Bakırköy saw flash floods taking over underpasses.

People trapped in low-storey residences were rescued by firefighters while others less affected rushed to evacuate from their homes and shops. Kurbağalıdere stream on the Asian side broke its banks, causing parked cars on its banks to drift away.

Storm and lightning also affected other cities in the country. In the capital Ankara, a lightning strike injured six recruits in a training ground of the Turkish National Police's Special Operations Unit in the Gölbaşı district.

In the city of Bursa, south of Istanbul, houses and an open marketplaces were inundated with floodwaters. In Tekirdağ in northwestern Turkey, a wall collapsed in the storm damaging cars, while roads to some villages were closed to traffic due to heavy rain in Tekirdağ's neighboring Edirne.

In the western province of Eskişehir, large hail caused heavy damaged to over 100 cars. In Kocaeli, a city neighboring Istanbul, a ferry boat barely escaped a tornado but it winded down meters away from the ship.

According to weather forecasts for the next five days, Turkey will experience constant rainfall throughout the week. Partly cloudy weather will dominate the Marmara region which includes Istanbul, and downpours will increase particularly in the evening hours and through the night. Storms and downpours are expected to hit the Ege region in the west and Mediterranean region of the country in the south.

However, the rainfall is not expected to end concerns over a future drought in Istanbul. Water levels in Istanbul's reservoirs remain low. Since the precipitation affects only some districts, it does not contribute much to the water levels.

Istanbul Mayor Kadir Topbaş said the rainfall was "localized" rather than regular and lasting precipitation. "Still, it would help against evaporation that reaches the level of 400,000 cubic meters daily in the summer," he said.

A proper drizzle lasting throughout the month, rather than a sudden, brief downpour, will raise yearned water levels, experts say.
Water levels in Istanbul's dams are about 26 percent full due to low precipitation attributed to climate change. Rainfall is predicted to diminish by 25 to 35 percent in the country in 2014, below previous averages.

Turkey is building new dams and developing projects to address the expected water shortages particularly in big cities like Istanbul and Ankara. Authorities urge citizens to save water by using it sparingly and carefully.
Last Update: Jun 04, 2014 1:58 am
RELATED TOPICS