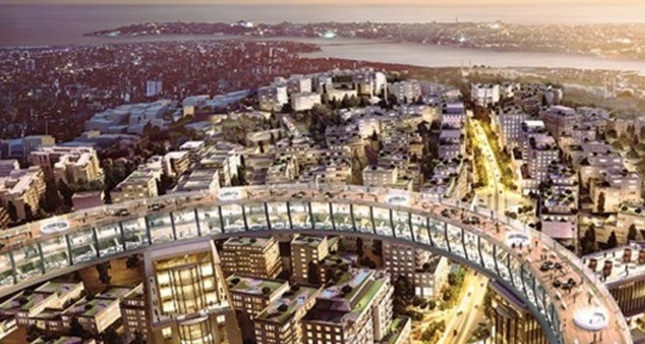 by Daily Sabah Jun 05, 2014 12:00 am
ISTANBUL — The Beyoğlu Municipality has decided to initiate an urban renewal project in several neighborhoods, including Okmeydanı - which has been in the headlines due to violent protests - to refurbish about 5,000 buildings declared unsafe for inhabitation.

Okmeydanı, a district of Istanbul that has been at the center of violent riots, will undergo a facelift after its inclusion in Turkey's ambitious urban transformation project to demolish unsafe buildings Istanbul's Okmeydanı, a district beleaguered by violent riots in the past months, has been included in a nationwide urban transformation project which aims to demolish buildings unsafe for accommodation in a country sitting on multiple fault lines.

The council of the Beyoğlu Municipality where Okmeydanı is located declared several neighborhoods in the district a "risk zone," a term used to describe areas unsafe for inhabitation due to shoddy construction of buildings.

Fetihtepe, Kaptanpaşa, Keçecipiri, Piripaşa and Piyalepaşa are five neighborhoods in which over 5,000 buildings were included in the designated risk zone. The council's decision will be referred to the Ministry of Environment and Urban Planning. Beyoğlu Mayor Ahmet Misbah Demircan had revealed plans for Okmeydanı's transformation earlier in remarks to journalists.

Demircan stated the population of the district, which currently stands at 74,000, will increase to at least 100,000 following the redevelopment and new Okmeydanı would be a popular spot on Istanbul's European side, "a special destination, a place like France's Champs-Elysees." New buildings will be constructed in an area of 1.6 million square meters according to the municipality's plan and construction contracts will be awarded companies through public tenders.

Okmeydanı became the 25th district of Istanbul to be declared a "risk zone." Like Okmeydanı, nearby districts are mostly working-class areas plagued by haphazard urban development in the second half of 20th century. Those districts host shanty neighborhoods where houses and other buildings lack building permits.

Another common characteristic of many areas in those districts, is that they provide recruitment for terrorist organizations which find support amid impoverished, unemployed youth and children of migrant families. Exploiting an anti-establishment sentiment among long-neglected communities living in those districts, terrorist organizations often incite riots, particularly in Okmeydanı. Earlier this month, two bystanders were killed, one by a police bullet and the other by a homemade explosive thrown at police by rioters in Okmeydanı. A police investigation into the riots found suspects included supporters of terrorist organization Revolutionary People's Liberation Party-Front (DHKP-C) and members of terrorist organization PKK's youth wing. Okmeydanı is also known as the home of Berkin Elvan, a young Gezi Park protester who died in a coma, after being struck by a tear gas canister.

Elvan's death inspired both this month's riots and March riots during which a 22-years-old man, a fellow resident of Okmeydanı, was
killed by rioters.
RELATED TOPICS