Business group head resigns over abuse of workers at factory 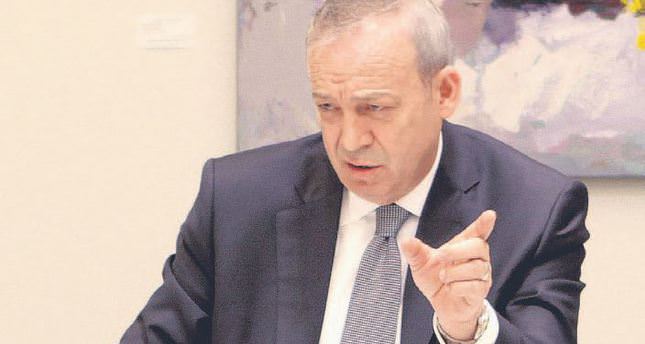 The head of top business group TUSİAD, Muharrem Yılmaz, resigns after he decided to intimidate his workers by pouring manure where they were picketing

ISTANBUL — According to outlets, in order to prevent the striking workers from being seen, the management surrounded the area with trucks. When the workers refused to disperse, the management poured 13 tons of liquefied manure on the sit-in area.

While this was intended to disperse the crowd, it actually attracted flies onto the plant. Eventually management had to clean up the mess and also disinfect the surrounding villages.

Tekgıda-İş Union Bursa Area Organization Chief Suat Karlıkaya who stated that the factory management did their utmost to uproot the striking workers, described the events as, "To prevent news of our protest getting out, they surrounded us with trucks. We called the traffic police, to no avail. Then they poured filth onto the area.

This is a food factory, and for animal waste to be poured is a grave mistake." Karlıkaya stated that the aim of the strike was to obtain working conditions in line with ILO norms and law no. 4857. "Sütaş workers are demanding a working life under a unionized, collective agreement.

For this to be achieved we need 1,000 workers within Sütaş to be union members. There are currently 850. Sütaş management is pressuring workers to prevent the number of unionized workers from increasing," Karlıkaya told. He continued, "Aside from the 30 workers who were removed from their jobs in 2012, a further 14 workers at Karacabey and 12 workers at Aksaray, left their jobs so as not to give their e-devlet passwords, through which company officials can figure out whether workers are unionized or not.

There is enormous pressure on those still working. We want those jobs returned." Recep Bulut, one of the workers fired by SÜTAŞ management, stated that he was out of a job because he used his union rights. Bulut said, "They wanted my e-devlet password. When I refused to give it to them. I was fired for no reason. They poured tons of animal waste on the area where we were. The stench was unbearable." Another worker in a similar position to Bulut, Cumhur Şentürk, said his sole aim was to be able to work and use his legal union rights.

Karlıkaya drew attention to the state of the TÜSİAD chairman's company's worker rights and continued, "TÜSİAD, in my opinion, is an NGO that protects employer rights. If the chairman of TÜSİAD can get away with this behavior, other company directors will take note. If we do not receive a response by June 10, we will rally in front of TÜSİAD headquarters."

Speaking to press after his resignation, Yılmaz, who released a statement on workers' rights on May 1, emphasized that as the chairman of TÜSİAD, he is responsible for protecting TÜSİAD's reputation. "I see that some media in Turkey has tried to associate the problem in my plant with my position in TÜSİAD. I cannot let TÜSİAD see harm because of me," Yılmaz stated. Regarding TÜSİAD President Muharrem Yılmaz's resignation, AK Party Deputy Chairman Salih Kapusuz said, "We have now understood that the people who were talking about human and worker rights on Labor Day and during the Gezi protests, did not consider the rights of their own employees. When they were talking about respecting labor, they apparently implied the labor of provocateurs throwing molotov cocktails on Labor Day."

TÜSİAD is one of the largest organizations for Turkish business and the recent events have had a ripple effect in Turkish economic circles. It's also known for its members' support to protestors during the Gezi Park protests. Prime Minister Erdoğan had slammed the organization for supporting an event which can lead to economic uncertainty in the country.

Turkish Industrialists' and Businessmen's Association (TÜSİAD) Chairman Muharrem Yılmaz announced his resignation from his position after news of "manure scandal" at the SÜTAŞ factory he owns broke out.

According to Turkish media outlets, SÜTAŞ, a dairy and meat producer from which tens of workers have been recently fired due to their efforts to unionize, covered the area where fired workers protested with manure to prevent them from gathering. As Turkish media reported on Wednesday, the management of the factory began firing workers who had applied for union membership by obtaining the workers' passwords for the edevlet (e-government) system. The decision to strike was reached by the union Tekgıda-İş when 15 workers were fired. The union demanded the return of 56 workers to their jobs at the Bursa-Karacabey and Aksaray SÜTAŞ factories. The strike lasted 40 days and saw some unusual tactics.
RELATED TOPICS