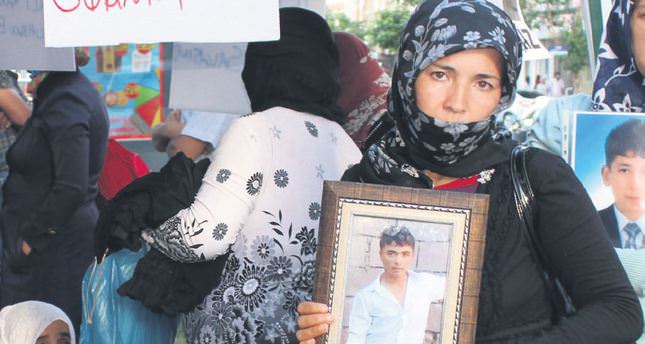 by Anadolu Agency Jun 05, 2014 12:00 am
DIYARBAKIR — A group of Kurdish mothers remain determined to get the terrorist PKK to release their kidnapped children, while pro-Kurdish BDP co-chairman Selahattin Demirtaş created an uproar after accusing them of being paid by Turkish intelligence.

It has been 16 days since a group of Kurdish mothers started a sit-in in the southeastern Turkish province of Diyarbakır, calling for the return of their children who were persuaded to join the terrorist organization PKK. Steadfast protests by undaunted mothers, later joined by fathers, continued yesterday despite their earlier evacuation from the protest site and remarks by a politician accusing them of acting upon the orders of the National Intelligence Organization (MİT).

Speaking at a meeting on Tuesday, Selahattin Demirtaş, co-chairman of the opposition Peace and Democracy Party (BDP), which is affiliated with the PKK, claimed some of the families that participated in the protest were "paid" by Turkish intelligence and their children were abducted by drug gangs, not the PKK as was claimed. It was the same Demirtaş who reportedly told families one week ago that he would contact officials in the terrorist organization to secure the release of their children.

In response to Demirtaş's remarks, Prime Minister Recep Tayyip Erdoğan said he should "prove" his accusations and said allegations that the intelligence services paid families was baseless.

But it was the families who were hurt most by Demirtaş's statements. Lütfiye Bozoğlu, whose 19-year-old son Serhat joined the PKK two months ago, left Erzurum in eastern Turkey to join protesters in Diyarbakır. She had no money for her travel and stay in Diyarbakır but was determined to attend the sit-in she watched on TV.

Bozoğlu, who makes a living by livestock breeding, sold her three cows to cover the expenses. Speaking to the Turkish media, Bozoğlu said Demirtaş was "wrong." "I wouldn't sell my son for money and no mother here would do that. I am not here for money or to start a fight. I am here for my son," she said. The tearful woman said she would not leave before her son returns. "I want peace, genuine peace. I want all those children in the mountains to come back. They are all children to mothers, no different to the soldiers they fought," she said.

The number of families joining the sit-in has varied as the days pass by, at least in part on account of the fact that the Diyarbakır municipality decided to evacuate the families from the sit-in site in front of the city hall. Currently, over 40 families are participating in the protest.
RELATED TOPICS