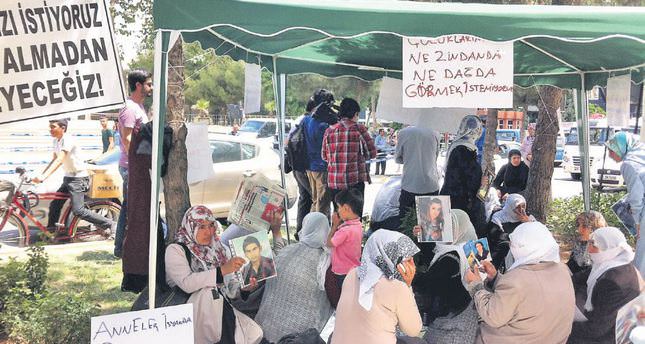 by Daily Sabah Jun 06, 2014 12:00 am
HAKKARİ — Security forces stopped a car in the Yüksekova district of Hakkari in southeastern Turkey. Two women accused of recruiting members for the terrorist organization were captured in the car, along with S.B. (16), Z.T. (17) and F.K. (22), three teenagers who had been persuaded to join the terrorist group.

The raid was conducted on a tip-off by Sacit Buz, the father of S.B. who had called her father and told him she had been "abducted" along with two other girls and was held in a house.

Tracing the telephone number the girl used, security forces located and rescued them. Buz and his wife Binnaz had arrived in Diyarbakır upon learning of the sit-in protest. The poor couple had to spend a night at a bus station when they arrived in Diyarbakır as they had no money. "All I want is to get back my daughter. She was not only my daughter, she was my friend too. I call on the prime minister, I call on Selahattin Demirtaş to help me and other mothers here for God's sake," Buz had told reporters earlier.

Kurdish mothers, later joined by fathers, have staged a sit-in in front of the Diyarbakır city hall since May 19 for their children. Over 40 families attended the sit-in.

Turkish media reported that the two girls' mothers, who were in the sit-in protest, will fly to Yüksekova by military helicopter to be reunited with their daughters.

In a related development, a 13-year-old boy claimed to have been abducted by the PKK two months ago was handed over to the police by his family in the Beytüşşebap district of the southeastern province of Şırnak after he fled the terrorist faction yesterday. The boy was released after testifying to the police. Also yesterday, an 18-year-old PKK member who fled the terrorist organization turned himself in to police in Hakkari. He told police he was in a group of six terrorists hiding out in a rural part of the province and fled on foot from the spot they were hiding.

The rescue operation and surrenders came at a time when the government hinted at military operations to retrieve the children "abducted" by the PKK. Turkish Prime Minister Recep Tayyip Erdoğan had said earlier that they had "other plans" to bring back the children if two parties known for their ties to the terrorist organizations do not negotiate their release. "If the BDP [Peace and Democracy Party] and HDP [People's Democratic Party] are sincere, and whoever else wants to contribute to the reconciliation process, they should do their best to bring those children down from the mountains. Otherwise, the state of Turkey has its own procedures to apply to bring them back to their families," Erdoğan said on Tuesday.

Echoing Erdoğan's remarks, Justice Minister Bekir Bozdağ told reporters yesterday that plans were in place to bring back the children. "For the first time, families loudly took up a position against the terrorist organization and wanted their children to be returned to them. I think this is a gain arisen from the reconciliation process," Bozdağ added, referring to his government's initiative to end PKK terrorism, restore peace in the region and reinstate the rights of the Kurdish community.

The BDP had pledged to families to hold talks with senior PKK officials for the return of children but apparently backtracked as BDP co-chairman Selahattin Demirtaş, who told protesting Kurdish mothers he would mediate the releases, later accused them of being "paid" by the Turkish intelligence agency. Officials from the BDP and its sister party HDP claim children took shelter in the PKK due to Turkey's policy of "oppression" against the Kurdish community. In a written statement, the PKK denied the children were "abducted" and claimed the youth volunteered to join their ranks but they "declined." Militants said some children were sent back to their families while
others were kept for "non-combat training."
RELATED TOPICS