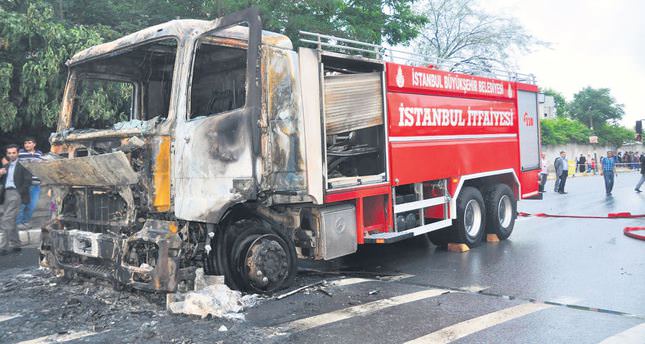 by Daily Sabah Jun 06, 2014 12:00 am
ISTANBUL — Unknown suspects hurled Molotov cocktails at a public bus in the Gaziosmanpaşa neighborhood of Istanbul's European side on Wednesday evening and torched a fire truck that rushed to the scene to put out the fire.

A group of masked assailants threw Molotov cocktails as the bus full of passengers passed by. The bus driver stopped the vehicle and evacuated the passengers shortly before the bus caught fire. Firefighters rushed to the scene and extinguished the fire that had completely destroyed the bus. As the fire truck was leaving the scene, the assailants, who had set up barricades on the street, tossed Molotov cocktails at the truck. The driver managed to escape uninjured. Another fire truck was dispatched to the scene in the company of riot police. The assailants fled the area when the police arrived.

Turkish media reported that the assailants were supporters of the terrorist organization the PKK, while the police did not issue a statement about the attack. Earlier Wednesday, PKK supporters and a group opposing them clashed in Gaziosmanpaşa. The two groups hurled stones at each other before being dispersed by the police. Seven people were detained in connection with the clash. On Sunday, a riot broke out in the same district when members of the opposition Peoples' Democratic Party (HDP) set up a stand for a petition for the release of jailed PKK leader Abdullah Öcalan. A group of nationalists then engaged in a quarrel with HDP supporters and riot police were deployed to the area. Some HDP supporters clashed with the riot police trying to disperse them. Four people were injured in the incident.

In a related development, several photographs have surfaced on social media showing the same man among HDP activists on one occasion and among the nationalists in another confrontation between the two groups. The unidentified man makes a hand gesture particular to the nationalists when he is among them and makes the victory sign attributed to the PKK supporters when he is with the HDP crowd.

The two photos raise questions about a possible provocation to pit the two groups against each other. Gaziosmanpaşa is a working-class district with a mixed population of migrants and immigrants of Kurdish origin and people from central Turkish cities and the Balkans. Violence is common in the impoverished district but is mostly restricted to gang-related incidents.

Şamil Altan, an Istanbul representative of the HDP, claimed in remarks on Sunday that the attack on their supporters was "planned in advance" and "the work of the counter- guerilla," a name attributed to the alleged paramilitary forces of the state. Some reports in the Turkish media blamed nationalists from the Nationalist Movement Party (MHP) for the attack on the pro-PKK demonstrators, but MHP officials denied any link to the incidents. The HDP is an offshoot of the Peace and Democracy Party (BDP) and known for its ties to the PKK. The party was the target of attacks by ultranationalist activists in the past, particularly before the local elections in March.

FearIng the success of the reconciliation process, members of the terrorist PKK are trying to derail peace effors. Groups believed to be PKK members torched a fire truck and public bus in Istanbul's Gaziosmanpaşa neighborhood while PKK members among a group that blocked a road in Diyarbakır shot and wounded a soldier.
RELATED TOPICS