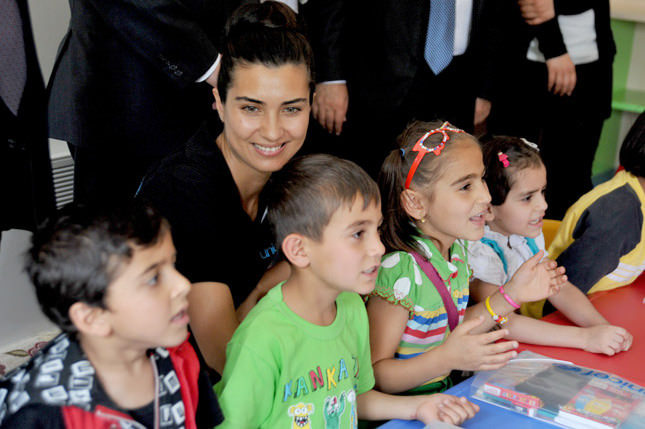 Turkish actress Tuba Büyüküstün, UNICEF's goodwill ambassador, visited a school set up for Syrian refugee children in Kilis as part of her first official mission and described the experience was an eye-opener

KILIS — As UNICEF's Goodwill Ambassador for Turkey, Turkish actress Tuba Büyüküstün started working for children rights in Kilis on June 4. For her first official mission Büyüküstün participated in the opening ceremony of the first UNICEF school for Syrian children living in refugee camps. The young actress then presented UNICEF bags to the students at the Gazi Primary School. She will continue to engage in joint activities with the U.N. agency's works and create awareness not only in Turkey, but across the world.

As the goodwill ambassador, Büyüküstün extended her thanks to all stakeholders via her official Twitter account, underlining it was a "gut-wrenching and eyeopening first mission." Onlookers say she drew the children's attention with her "gentle attitude and willingness."