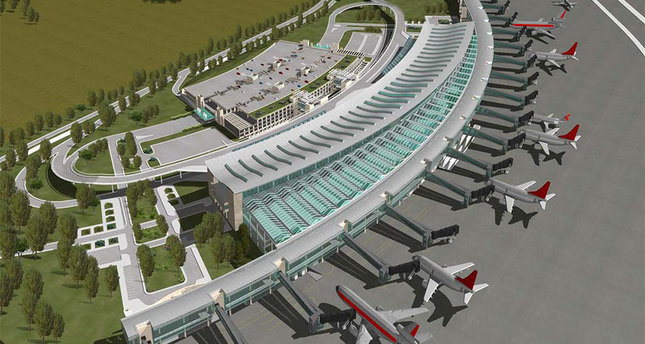 Istanbul Grand Airport, to be completed by 2018, is part of the government's plan to transform the city into a regional transport hub

ISTANBUL — Consturction has started on Istanbul's third airport, expected to be the biggest in Europe by 2018, following a foundation-laying ceremony attended by Prime Minister Recep Tayyip Erdogan. The airport is located in Arnavutköy, a district in the northern part of the city's European side. One of the government's mega projects along with Kanal Istanbul, a new waterway that will straddle Istanbul's European side and a third bridge, the airport, tentatively titled Istanbul Grand Airport, is expected to be named after Mevlana, the
Sufi mystic commonly known as Rumi.

Another name considered is Vecihi Hürkuş, an aviation pioneer who built the country's first locally-produced airplane. The project will cost more than 10 billion euros when construction is completed, scheduled for 2018. The Cengiz-Kolin-Limak-Mapa-Kalyon Consortium, a joint venture of Turkish companies, won a tender for the third Istanbul airport in May 2013, promising to pay the state 22.1 billion euros (plus tax) over 25 years starting in 2018. Built over an area of about 79 million square meters, the airport will considerably relax aircraft traffic on the European side of the city. Atatürk Airport, currently the only airport on the European side, is expected to be closed in 2021 and fully replaced by the third airport. The third airport is farther from central Istanbul, while Atatürk Airport remains in the middle of an area of rapid urban development and works over capacity. In 20 years' time, Istanbul's airports' commercial aircraft traffic will exceed 1 million aircrafts, according to a 2010 forecast by Turkey's Middle East Technical University. The third airport will have a capacity of 150 million passengers per year.

The airport will have 165 passenger boarding bridges, four terminals connected with a railway system, three maintenance buildings, eight air traffic control towers, six runways, 16 taxiways, an airport apron of 6.5 million square meters with a capacity of 500 airplanes, a car park with a capacity of about 70,000 vehicles and touted as the largest airport car park in Europe, a clinic, fire department, hotels, a convention center, and recycling and waste disposal plants. The airport will be connected to the Istanbul metro, and multi-lane highways will be built to facilitate access to the airport.

The area where the airport will be built was chosen through consideration of ecological balance, wind data and the natural and artificial obstacles of the region.
Last Update: Jun 07, 2014 11:28 am
RELATED TOPICS