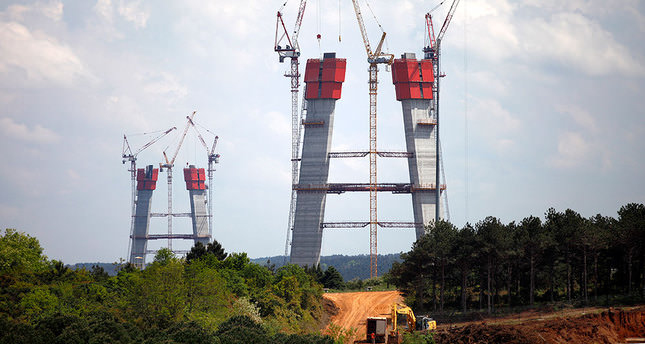 by AA Jun 07, 2014 12:00 am
ISTANBUL — The Third Bosporus Bridge and North Marmara Highway Project was honored on Thursday with an Achievement Award by London-based EMEA Finance magazine, which follows the financial markets thoroughout Europe, Middle East and Africa, according to a statement by Turkish IC ICTAS Construction Company.

The project includes the construction of highways in the vicinity of the planned third Bosporus Bridge - in Istanbul - which will be nearly 115 kilometers long, according to the construcrtion company, to whom the project was awarded to last May along with Astaldi S.P.A.

"The award has motivated us and given us pride during the construction stage of the bridge, which will be the first of its kind in many respects," said Serhat Çeçen, one of the IC ICTAS Board of Directors member, in the statement.

The bridge, which is named as Yavuz Sultan Selim Bridge, would be the widest (59m), longest (1048m) and highest (320m) bridge in the world, according to IC ICTAS Construction Company.