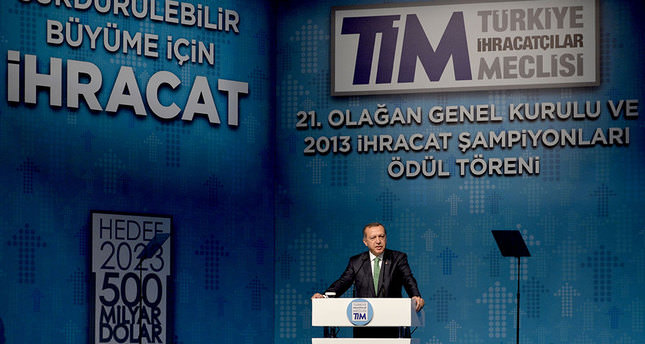 Praising the 5.8 percent rise in exports in May - the highest in Turkey's history - Erdoğan said "We are proud of the performance of our exporters and manufacturers who have set this record." He said "In spite of all the attacks, Turkey is walking towards its 2023 target." He also pointed out that Turkey is now generating know-how alongside its imports and exports.

Erdoğan also referred to Turkey's judiciary saying "The administrative judiciary (Council of the State) is not an adviser but a stumbling block for a progressive and growing Turkey."

In his speech, Prime Minister Erdoğan described the economic challenges which Turkey faced in the past. He called the 2008 global economic crisis 'a big test for Turkey's economy', and said the AK party government overcame the crisis with success.

With the reforms introduced through AK party's 12 year rule, the 'elitist' circle was broken and provided opportunities for 'Anatolia' said Erdoğan.