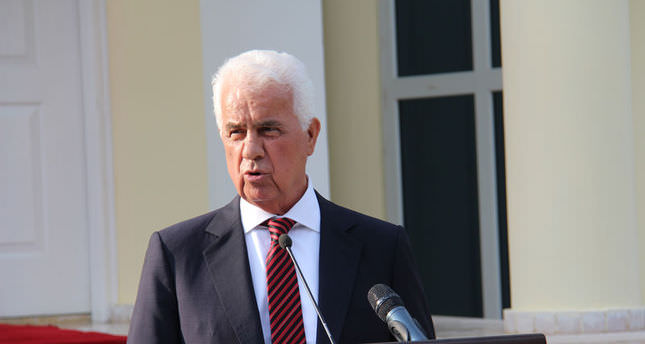 by AA Jun 07, 2014 12:00 am
SIVAS — Turkish Cypriots might lose faith in finding a solution to the dispute over the divided island of Cyprus if the Turkish and Greek Cypriot communities fail to reach a deal by the end of this year, says Turkish Cypriot leader.

President of the Turkish Republic of Northern Cyprus, Derviş Eroğlu told a conference at Cumhuriyet University in Turkey's eastern Sivas province that a "strong Turkey" mattered to a possible resolution.

The leaders of the two communities announced the restart of negotiations to unify the island, declaring an action plan that entailed a federation of two nations.

"This is the last chance," Eroğlu said at the conference where he received an honorary doctorate.

"Turkish Cypriots have come to a point where they believe that a solution will emerge. But if the negotiations go on and on and no deal is reached by the end of this year, it is very difficult to see Turkish Cypriots holding the same conviction."

Eroğlu said a United Nations peacekeeping force stationed on the island since 1964 was an obstacle in the way of effective talks with the Greek Cypriot side.

"The [force] is not useful for us. The Greek Cypriots have no intention to talk with us as long as it stays there," said Eroğlu.

The Turkish Cypriot leader also criticized a U.N. resolution on Cyprus, which recognizes the southern Greek Cypriots but not the Turkish Republic of Northern Cyprus as an authority on the island.

"Greek Cypriots are a member of the European Union and the United Nations and they are not harmed by this deadlock. They need to be conveyed certain messages."