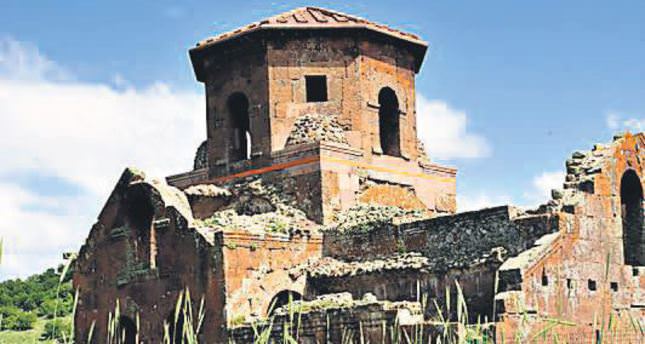 One of the world's most endangered monuments, the dome of the Red Church in Cappadocia has been restored, while financial assistance is needed for the rest

NEVŞEHIR — The dome of the 1,500-yearold Kızıl Kilise (Red Church) situated in the west of Cappadocia was saved from collapse and restored. The church was placed on the 2008 World Monuments Watch List of the 100 most endangered sites by the New York-based World Monuments Fund.

The Paris-based Association for Cappadocia's Friends was founded in 1995 to oversee the restoration of the Red Church. Speaking to the Anadolu Agency, Osman Diler, the organization's Turkish representative, said the association is currently seeking financial resources to renovate the rest of the church. According to Diler, they exerted great effort to inscribe the Red Church on the World Monuments Watch List. Since doing so, "it has now become easier to promote the church and find financial aid," Diler said.

Among Cappadocia's first churches, the Red Church has an important place in religious tourism. Upon the arrival of St. Gregory Nazianzus (Gregory the Theologian) to Cappadocia's Güzelyurt district, he spent his last days at a farmhouse near the Red Church. As one of the archbishops of Constantinople, he is recognized as one of the founders of the Orthodox sect in the fourth century.

In line with carbon analysis, it is believed that the church was constructed after his death in the sixth century and subsequently became a religious center for Christians.

Launched in 2011, the restoration project has been supported by France, Greece and the U.S. along with some private associations and benefactors.

The project costs roughly 500,000 euros and was divided into different phases. The first phase was completed under the head of retired professor İsmet Ağaryılmaz from the Faculty of Architecture at Yıldız Technical University.

The church's dome would have collapsed unless necessary action was taken. At present, 30 percent of the project has been completed.

"When the sufficient financial loan is found, the second phase will kick off. There is an urgent need for collaboration," Diler noted. There are unlicensed excavations around the church due to the lack of a permanent presence there. A guard is necessary although police officers are regularly sent to the area.

As a sign of the restoration's success, the number of foreign tourists is gradually increasing. An entrance fee will be charged when the church is opened to visitors.
RELATED TOPICS