Girl kidnapped by PKK glad to be free, calls for peace 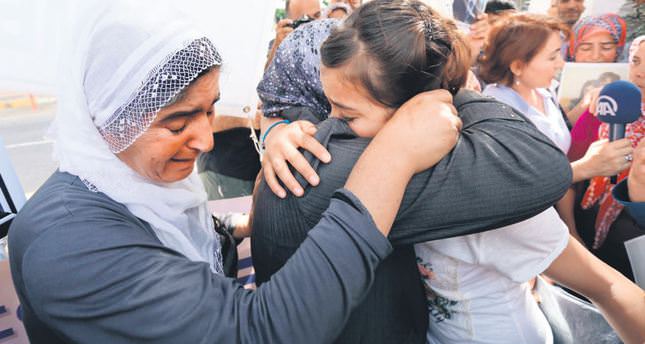 by AA Jun 09, 2014 12:00 am
DIYARBAKIR — A 16-year-old girl, S.B., who was forcibly recruited by terrorist organization the PKK, was reunited with her family earlier this week after joining the PKK last month. She was rescued by security forces in Yüksekova, a district of the southeastern province of Hakkari on Thursday, along with two other teenagers. S.B., whose name is being kept secret for security reasons, was reunited with her family after she spent 20 days in the mountainous regions near the border with Iraq and received weapons training from the PKK. S.B. told Anadolu Agency that she and other young people were deeply affected by the terrorist group's propaganda. She claimed they were not taken by force but said it was "not of our own accord, either."

"We were told that we would go up to Iraq's north. We were aware that we would be taken to mountains but there was nothing we could do," she said. She said herself and other young people were promised "law enforcement-type jobs" after the terrorist organization reached its separatist goals in country's predominantly Kurdish southeast. She claimed senior PKK officials treated them well "because of peace process."

After meeting their daughters, S.B.'s family visited other families at a sit-in protest outside Diyarbakır city hall. In late May, the families of children who were abducted in April began a sit-in protest to seek help in securing their release. Prime Minister Recep Tayyip Erdoğan has called on pro-Kurdish opposition parties to find and bring back the children. The protest inspired other families in several cities to demand the return of their children whose ages vary from 13 to 23. Families suspended their sit-in protest yesterday, fearing tensions over the death of two people in a shootout between PKK and Turkish troops in Diyarbakır's Lice district but pledged to resume the sit-in today as well as a hunger strike if their children are not returned.

S.B.'s mother Binnaz, not letting go of her daughter's hand throughout the interview, called on government officials and pro-Kurdish figures to "bring peace" to the region. "I want them to bring peace. And I believe our brothers and sisters in the mountains are also waiting for peace," she said.

Late legendary South African leader Nelson Mandela's lawyer, Essa Moosa, was also in Diyarbakır on Saturday to visit the families. "All of these children will certainly be back once the [reconciliation] process becomes successful," said Moosa, adding that his team is holding talks with all political sides in Turkey to speed up the process.

Moosa was referring to the reconciliation process the government initiated in 2012 to restore the rights of the oft-neglected Kurdish community and end attacks by the PKK.

The terrorist organization conducted a violent campaign for Kurdish self-rule for nearly four decades which killed over 30,000 people. As the reconciliation process took hold, the PKK announced a de facto ceasefire and "withdrawal" from Turkish territories in March 2013.
The PKK, active in Turkey's southeast where the Kurdish population is centered and Iraq's north, is considered a terrorist organization by the Turkish government, as well as by the U.S., EU member states and other governments and international organizations such as NATO.
RELATED TOPICS