Turkey and Iran pledges to stop terrorism in Middle East 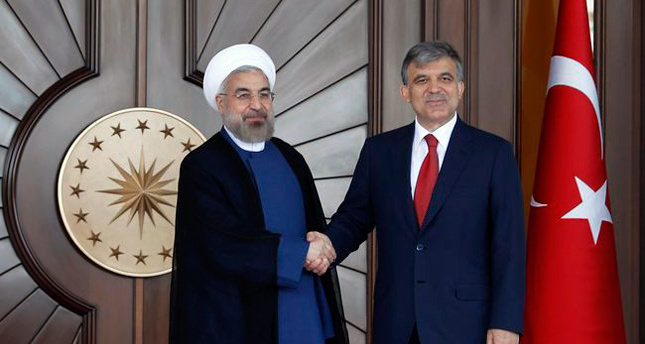 During the meeting with Rouhani, Abdullah Gül pointed out that the volume of trade between the two countries is currently about $15 billion, he said the two countries are determined to increase the trade volume to $30 billion.

Rouhani stressed that Turkey is important regionally, adding he was glad that Iran and Turkey have been enjoying political and economic cooperation for many years.

Iranian President Rouhani arrived in Ankara on Monday for his first official visit to Turkey. He is accompanied by a number of Iranian cabinet ministers and high-ranking officials.

Determined to fight against terrorism

"Iran and Turkey, the two important countries in the region, are determined to fight against extremism and terrorism," Iran's President Hassan Rouhani told a news conference in Ankara.

He said the instability in the region benefited neither the neighboring countries, nor the world, and said Turkey and Iran agreed to work together.

President Gül said that Turkey "supported a deal that will help remove all the sanctions".
Ankara defends Tehran's right to peaceful nuclear technology but adamantly opposes any development of nuclear weapons, which it fears would lead to an arms race in the Middle East.

"We don't want any country in our region to possess nuclear weapons. We maintain our desire for a Middle East cleared of weapons of mass destruction," Gül said.

In Ankara, Rouhani said he and Gül discussed Syria and Egypt, and how Iranian-Turkish cooperation could help stop the bloodshed in the region.

"What's important to us is for the two countries to reach stability and security, that the people's votes are determining and an end to the war, bloodshed and killings between brothers".