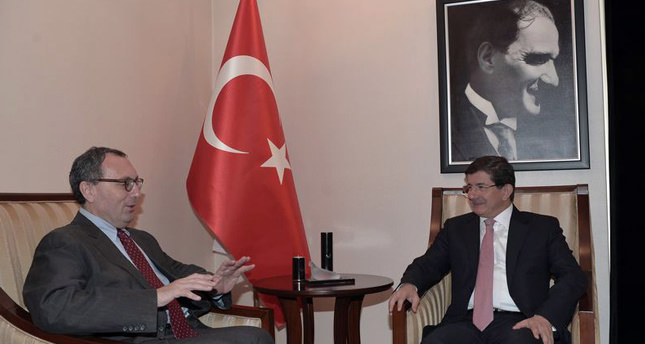 by AA Jun 09, 2014 12:00 am
ANKARA — Turkey's foreign minister Ahmet Davutoğlu met the head of the European Union delegation Stefano Monservisi to discuss Turkey's EU membership bid on Monday. The meeting was closed to press and lasted half an hour.

Turkey's EU mission has been without an ambassador since former envoy Jean-Maurice Ripert left his post in October after a call from France's President Francois Hollande. This meeting was the first between Davutoğlu and Stefano Monservisi, who was appointed to Turkey in February.

Turkey continues to pursue its EU membership and aims to open chapters 23 and 24 that cover judiciary, justice, freedom and fundamental rights.

The Foreign Minister and The EU Delegation head also talked about the latest developments in Ukraine, where Petro Poroshenko, who scored a landslide victory in last month's presidential poll with 55.9 percent of the vote, pledged to crush the separatist insurgency in the east at his sworn-in ceremony Saturday.