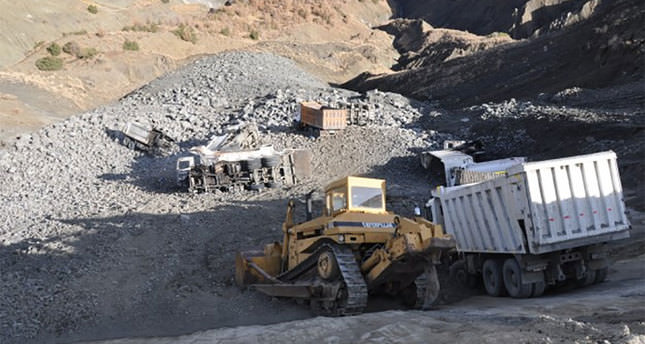 by AA Jun 09, 2014 12:00 am
KARS, Turkey — PKK members released two workers that they had abducted hours earlier on Sunday after raiding a road construction site in the eastern Kars province of Turkey.

The workers, Cemil K., a machine operator, and Mesut D., a private security guard, immediately returned to the site after being freed in a rural area by the militants.

Earlier in the day, the PKK militants had raided a construction site and had also attempted - but ultimately failed - to set fire to vehicles on a road between the provinces of Agri and Kars, as security forces arrived at the scene. The militants then proceeded to abduct the two construction workers.

The attack came a day after two protesters died and two people, including a soldier, were wounded during an illegal protest in the southeastern Turkish province of Diyarbakır.

According to an AA correspondent in the city, unidentified assailants among the group opened fire and security forces likewise retaliated, killing two of the protesters.

Abdulbaki Akdemir, 50, died at the scene, and Ramazan Baran, 24, was pronounced dead at Lice district hospital.

The group of protesters had attempted to block the road between Diyarbakır and Bingöl provinces, hurling hand-made grenades and rocks at servicemen, before security forces intervened.

They were allegedly protesting the construction of a military outpost in Lice district.

Following Ramazan Baran's burial in Baglar district of Diyarbakır on Sunday, a group of protesters attacked security forces with fireworks and stones.

Another group of pro-PKK protesters attacked a military barrack with Molotov cocktails and stones on Sunday, after erecting a barricade at a nearby road, in the eastern province of Hakkari.

Police managed to disperse the masked protesters with water cannons and tear gas.

Meanwhile, a group of PKK members raided a stone pit and set six trucks and four construction vehicles on fire on Sunday in the eastern province of Bingöl, an AA correspondent reported.

In Istanbul, a group of people, including women and children, held a demonstration in Bağcılar districton Sunday to protest the incidents in Lice.

The police stopped the group from approaching the district's police station and a clash erupted as unidentified protesters threw stones and cans at the police, which used tear gas to disperse the demonstrators.

A woman fainted because of tear gas and two police officers were wounded during the intervention.

Intermittent clashes between protesters and security forces have been rampant since late May in Lice.

Diyarbakır governor's office said in a statement last week that, since May 24, PKK's militants and affiliate groups had engaged in kidnappings, roadblocks and had attacked security forces with home-made explosives and firebombs since May 24.

He added security forces had registered 54 such events for the last two weeks.

These incidents have occurred after the terrorist organization PKK reportedly kidnapped an unknown number of children on April 23, the national day for children, threatening to destabilize a delicate 'solution process' which addresses the issues of the Kurdish people.

Turkey's 'solution process' began early last year with a ceasefire between the Turkish government and PKK terrorist organization. The government pledged democratic reforms to empower minorities, particularly the Kurdish people, which is by far the largest representing 18 percent of the population.