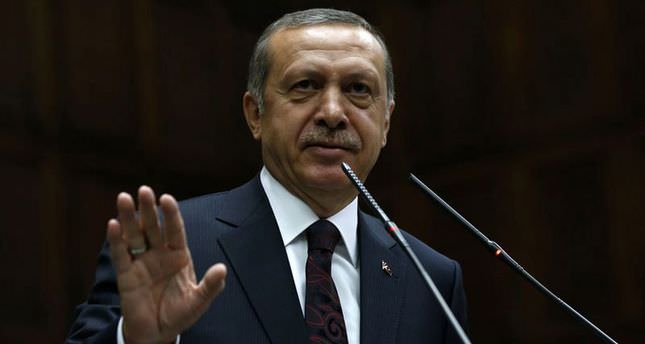 The perpetrators of the flag removal incident at a military base in Lice district of Diyarbakir Monday sent a teenager to remove the flag with full knowledge of the high risk of being killed in the process as per previous occurrences in the past. They, however, were unsuccessful in the provocation to sabotage the 'solution process', Erdoğan said.

Turkey's southeastern region has recently been tense after two protesters were killed during an illegal protest against the construction of a military outpost in the southeastern Lice district of Diyarbakir on Saturday. The two men died after security forces intervened in demonstrations held by a pro-Kurdish group who attempted to block the road between Diyarbakir and Bingöl provinces, hurling hand-made grenades and stones at security forces with the aim of fueling further protests amongst the Kurdish people.

"This country has not only been fighting terror for 30 years but also the dirty mentality behind it," Erdoğan said and added that "mothers' demands" for the return of children reportedly kidnapped by the PKK terrorist organization on April 23, scared the terrorist organization and its supporter; the Peoples' Democracy Party."

These incidents threatened to destabilize the delicate 'solution process' which addresses the issues of the Kurdish people, Erdoğan said.
Turkey's 'solution process' began early last year with a ceasefire between the Turkish government and PKK terrorist organization. The government pledged democratic reforms to empower minorities, particularly the Kurdish people -- by far the largest minority representing 18 percent of the population.

Prime Minister Erdoğan offered his condolences to Pakistan Prime Minister Nawaz Sharif over the loss of life in an armed attack on Karachi Airport on Monday. In a telephone conversation with Sharif following the group meeting, Erdoğan expressed his sorrow and grief over the incident where 39 people, including ten terrorists, were killed in an attack on Pakistan's biggest airport in Karachi for which Tehrik-e-Taliban Pakistan — an umbrella organization of different Taliban groups in Pakistan -- had claimed responsibility for the deadly attack.