5 suspects arrested for taking down of Turkish flag 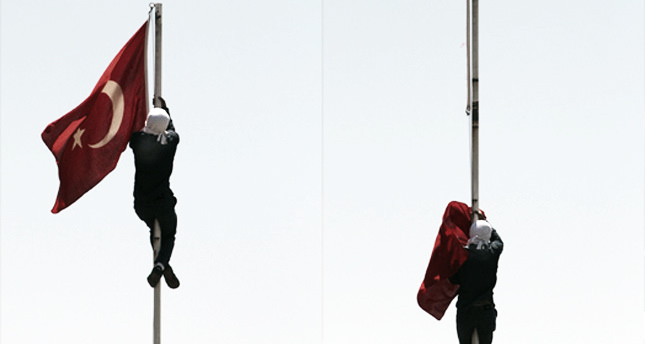 by AA Jun 10, 2014 12:00 am
DIYARBAKIR — Five people were detained on Tuesday by police in connection to an incident where a Turkish flag was torn down from inside a military compound during protests in Turkey's southeastern Diyarbakır province on Sunday.

The five were detained under laws against showing 'disrespect' to the Turkish flag.

The incident occurred during the funeral of two protesters who were killed during an illegal protest against the construction of a military outpost in the southeastern Lice district of Diyarbakır.

The two men died after security forces intervened in a demonstration held by a pro-Kurdish group who attempted to block the road between Diyarbakir and Bingol provinces at the weekend, hurling hand-made grenades and stones at security forces.

"I would like to clearly stress that this and similar heinous attacks and provocations will never reach their aims," Gül said in a written statement on Monday.

A masked protester took down the Turkish flag on Sunday at an air force command in Diyarbakir province during protests following the deaths of two men in an illegal protest against the construction of a military outpost in Lice district.

The office of Turkey's military chief Necdet Özel strongly condemned the attack, calling it a "provocative attempt to pave the way for civilian deaths and insurgency."

Turkey's southeastern region has recently been tense after two protesters were killed during an illegal protest against the construction of a military outpost in the southeastern Lice district of Diyarbakir on Saturday.