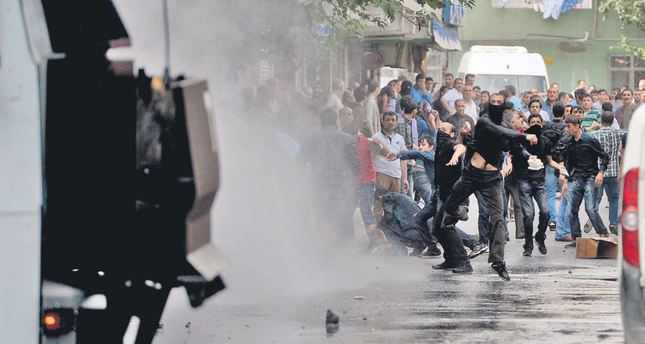 by Daily Sabah Jun 10, 2014 12:00 am
ISTANBUL — Following the killing of a PKK militant who opened fire on security forces and a civilian during a demonstration by the terrorist organization's supporters in Diyarbakır province in southeastern Turkey, pro-PKK rioters took to the streets in several cities on Sunday and yesterday to protest the killings.

Ramazan Baran and Abdülbaki Akdemir, two men among a crowd staging protests against the construction of military outposts in the region, were killed when troops fired in self-defense after PKK militants opened fire on security forces. The military said in a statement that one of the casualties was a PKK terrorist who targeted the troops.

The two men's deaths first sparked riots in Diyarbakır. Following the funeral of Baran, rioting PKK supporters clashed with security forces. A masked demonstrator, in an act of defiance of security forces' intervention, entered a military compound in central Diyarbakır and took down a Turkish flag hung at the site, while security forces did not intervene. Inaction against the incident led to criticism from nationalist circles.

Security forces abstained from the use of live ammunition despite continuous harassment fire by PKK militants in Lice and other areas in the region over the past few weeks to prevent inciting further riots.

Prosecutors launched an investigation into the killing of Baran and Akdemir. In a written statement, the Diyarbakır Bar Association said its officials conveyed concerns about the investigation and cited past investigations related to shootings in the region in previous years.

Prosecutors there assured the bar association that a thorough investigation would be conducted. The Diyarbakır prosecutor's office confiscated troops' weapons used in the shooting for forensic examination. According to the Bar Association's statement, prosecutors have pledged to conduct an unbiased investigation into the incident. Turkish security forces have long been accused by the PKK and locals of a brutal crackdown in the 1990s that involved the killing of civilians supporting the PKK in an attempt to curb support for the terrorist organization, though the murders often targeted innocent people. Cases into those often went unresolved.

In the western city of İzmir, a group protesting the killings marched in the Bornova district, chanting slogans in favor of the terrorist organization.

Pro-PKK demonstrators also attempted to torch police cars in the eastern province of Tunceli on Sunday night. Masked rioters hurled stones and Molotov cocktails at the police and attempted to bring down poles where security cameras were installed to avoid detection.
In the capital Ankara's Mamak district, a group protesting incidents in Diyarbakır, hurled Molotov cocktails at an empty passenger bus. The bus driver managed to save his bus from burning by driving away. Other demonstrators threw Molotov cocktails, flash grenades, glass balls and firecrackers at police trying to disperse them.

The Cizre district of the southeastern province of Şırnak, which has seen pro-PKK rallies over the past week, was also the site of riots late Sunday over the Diyarbakır killings. Masked rioters set up barricades on streets and attacked police with petrol bombs and stones. Rioters also planted a homemade explosive on a bridge in the district. Turkish police defused the bomb.
Istanbul also had its fair share of riots on Sunday.

In Bağcılar, on the European side of the city, a group convened in front of the offices of pro- Kurdish Peace and Democracy Party (BDP) and marched to denounce the killings in Diyarbakır. Demonstrators hurled bottles and stones at police. The Okmeydanı district also saw violent riots overnight by PKK supporters.

In protest of the killings, businesses in Yüksekova, a district of Hakkari were closed down yesterday. In a related development, a delegation of officials from the Peoples' Democracy Party (HDP), a sister party of BDP, visited Abdullah Öcalan, the jailed leader of the PKK, yesterday in the island prison where he is being held. In a statement before their departure, HDP officials said they would discuss the incidents in Lice and the state of the government's reconciliation process with the Kurdish community.

The protests and attacks come at a time of government efforts to accelerate the reconciliation process initiated to end the PKK conflict and reinstate the rights of the Kurdish community that makes up the majority of the population in southeastern and eastern Turkey.

Riots in Lice are part of a wider protest by the PKK which has resorted to intimidating the public and security forces one year after it declared a "ceasefire." PKK members often block roads in the southeast and east and set up checkpoints in a show of force. A road connecting the province of Bingöl and Muş, two provinces in the eastern Turkey, was blocked again by the PKK members on Sunday and yesterday. Terrorists held a bus carrying 25 teachers on the road for 12 hours and released them late Sunday.
RELATED TOPICS