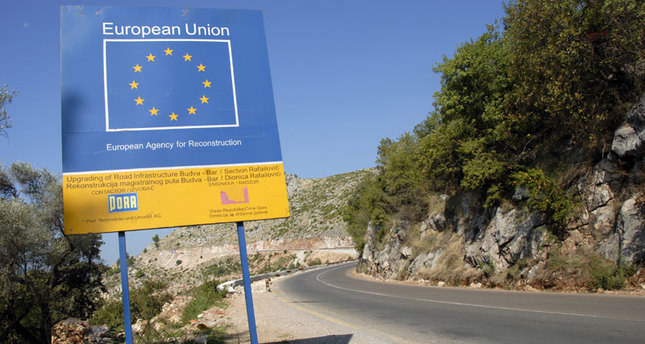 by AA Jun 10, 2014 12:00 am
PODGORICA, Montenegro — Turkey's EU minister has voiced support for Montenegro's EU accession during his visit to the country on Tuesday.

"We want Montenegro to be a member of the EU within the shortest possible time," said Mevlut Cavusoglu.

Cavusoglu said Turkey has also thrown its full support behind Montenegro's NATO membership bid adding "Euro-Atlantic integration of Montenegro is significant for the stability and security of the Balkans."

He met with Montenegro's Foreign Affairs Minister Igor Luksic, and following their meeting a "Cooperation Protocol" was signed between the two ministries.

Cavusoglu also said that both Turkey and Montenegro were working hard to impove both political and economic relations.

"I am happy mutual investments and the trade volume between the two countries have risen," he added.

Montenegro began accession negotiatons with the EU in 2012. Since then it opened nine chapters and two of them were closed.

The chapters form the basis of accession negotiations for each country to the EU. They focus areas which require reforms in order to meet the accession conditions.