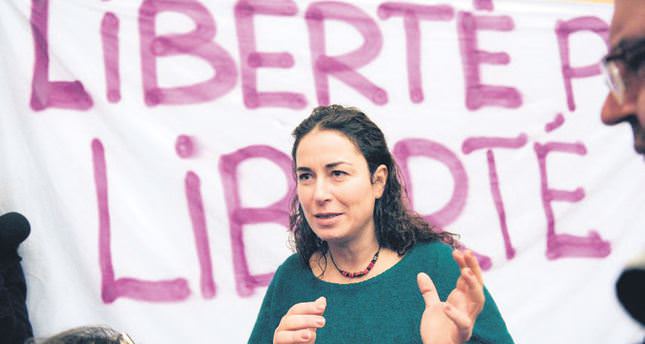 The Turkish Supreme Court yesterday overturned an aggravated life sentence for Pınar Selek, a sociologist accused of involvement in a 1998 bombing in Istanbul that was later found to be an explosion caused by an accidental gas leak, according to a team of experts

ISTANBUL — Selek was arrested after the explosion in Istanbul's Mısır Çarşısı (Spice Bazaar), which killed seven people and injured 127 others. She was imprisoned for two years but released in 2000 after a report by forensic experts that concluded the "bombing" was the result of an accidental gas leak in the bazaar, a busy marketplace and a popular destination for tourists in central Istanbul.

Announcing the verdict, Supreme Court Judge Ekrem Ertuğrul said the life sentence handed down by Istanbul's 12th High Criminal Court on Jan. 24, 2013, was overturned due to a legal error on the part of the lower court in the sentencing process. Noting the previous verdicts for her acquittal, Ertuğrul said that the lower court cannot "resist" rulings on the case unless the chief prosecutor's office files a complaint against the verdict.

Pınar Selek was a sociologist at Istanbul's Mimar Sinan University and conducting surveys on communities suffering from discrimination, including homeless children, lesbians, gays, bisexuals and transgender individuals. She was involved in a research project about the terrorist Kurdistan Workers' Party (PKK) and had interviewed the group's members when she was apprehended in an investigation into the blast two days after the incident.

Selek faced charges of building an explosive device and aiding and abetting the terrorist organization. Two weeks later, Abdülmecit Öztürk, another suspect, was arrested and told police he carried out the bombing together with Selek. However, he later retracted his testimony and claimed he was forced to testify to implicate Selek after being tortured by police while in custody. Öztürk was acquitted of charges related to the explosion. Selek spent two-and-a-half years in prison and was released on Dec. 22, 2000, after a report by experts assigned by the court found the explosion was caused by a leak from a gas cylinder.

A lengthy legal process started after her release. The first ruling in the case following her release led to the acquittal of Selek and Öztürk in 2006 in the incident. This ruling was issued due to contradictions in multiple expert witness and crime scene reports. Thirteen expert witness reports were prepared during the legal process. Four of them found the cause of the explosion was a bomb, while two others concluded both a bomb and a gas leak caused the blast. In 2007, the Supreme Court overturned the verdict and ordered a retrial. A local court acquitted Selek in 2008, but the Supreme Court overturned this verdict as well in 2009. The process continued with acquittals and appeals by prosecutors.

Finally, in January 2013, the 12th High Criminal Court handed down the aggravated life sentence to Selek. Selek's father Alp Selek told Anadolu Agency that her interviews with the PKK were the reason behind the police detaining her after the Istanbul explosion. He said his daughter were tortured when she refused to give information about the interviews.

Selek's Luxembourg-based attorney, Camille Bal, had previously told Anadolu Agency that they were willing to take the case to the European Court of Human Rights and Turkey's Constitutional Court if the appeal had been revoked. She said that her client was eager for the trial to end so she can return to Turkey. "She wants to return to her old life," Bal said. "She wants to have all her rights back."
Concerned about another imprisonment as her trial was continuing, Selek left Turkey. Selek, now 42, resides in Strasbourg, France where she pursues doctoral studies in political science at the University of Strasbourg. Her case found support from human rights activists who long claimed she was persecuted for her work on vulnerable communities and the PKK.
Last Update: Jun 12, 2014 1:08 am
RELATED TOPICS