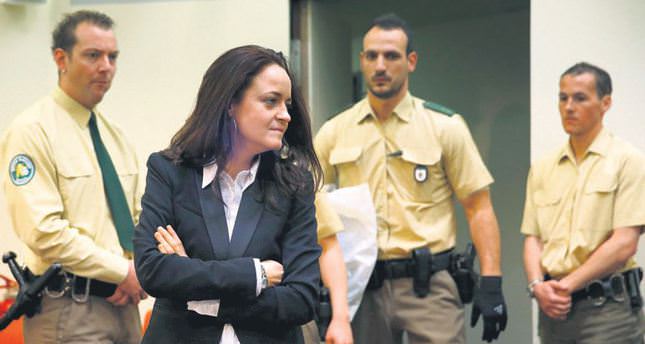 by Evrin Güvendik Jun 13, 2014 12:00 am
Ayhan Sefer Üstün, head of the Turkish Parliament's Human Rights Committee, criticized the trial on National Socialist Underground (NSU), a neo-Nazi gang involved in the killing of eight Turkish people in Germany. Üstün stated that the court's refusal to probe the backers of NSU was concerning. Üstün and other members of the committee will be in Germany on June 26 to attend the next hearing of the NSU trial where the gang member Beate Zschape is being tried. He said the hearing will be the last one before a judicial recess. "The trial is not proceeding the way we expected.

The court should investigate those behind the gang, yet it refuses applications to that extent. It is concerning," he said. "The terrorist organization behind the defendants should be revealed. Another concern for us is that an eyewitness (to the gang's activities) was found dead while the trial was underway. We are worried about the process, so we decided to attend the next hearing," Üstün said.
Referring to the resignation of Sebastian Edathy, a German lawmaker heading a committee investigating the neo-Nazi murders following a scandal, Üstün said those developments "seemingly dealt a blow to the revelation of facts related to the case."

Üstün said racist attacks targeting Turkish people in Europe were continuing. He also said 38 racially-motivated attacks against Turkish people occurred in Germany last year alone. He noted those attacks involved insults, beatings and vandalism of graves and mosques.
The trial of NSU member Beate Zschape, the only defendant standing trial as two other members killed themselves, will resume in Munich. NSU is accused of murdering ten people, eight of who were Turkish, between 2000 and 2007 as well as carrying out a bombing which injured 22 people in Cologne in 2004. The trial which started in 2013 was marked by postponements over technical issues and the silence of Beate Zschape in the courtroom throughout hearings.

Murder victims' families and survivors of the Cologne bombing had complained of a biased approach to the case by investigators who initially considered the bombing was the result of a local conflict between Turkish people. It was later revealed that the German intelligence services were aware of NSU but did not act in time to prevent the murders, and an intelligence official was accused of destroying intelligence files on informants with connections to NSU. The intelligence failure on the NSU case raised concerns that the group was protected by top intelligence and police officials.
RELATED TOPICS