Kurdish mothers raise their voice against the PKK: 'Give back our children' 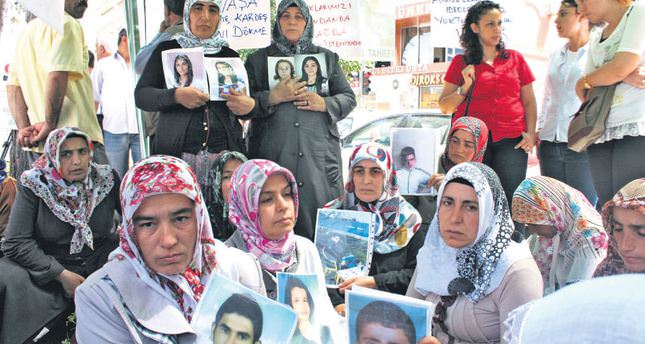 by Elif Merve Yediyıldız Jun 14, 2014 12:00 am
With tears in their eyes and a ray of hope in their hearts, Kurdish mothers in Diyarbakır, a province in southeastern Turkey, continue their protest for the return of their children, who were forced to join the terrorist organization the PKK a month ago. Speaking to Daily Sabah, mothers, fathers and siblings of the children gave an account of their ordeal after they lost their loved ones to the PKK and repeated their demand for the terrorist organization to return their children. Diyarbakır has been rocked by an unusual strike. Mothers from across Turkey have been holding a sit-in protest in front of the Diyarbakır Metropolitan Municipality building since May 19, calling the PKK to release their children. At first, the protest was held in the front yard of the municipality building until the mothers were forced to leave by municipality officials. They relocated to a median on the main street, across the road from the municipality building.

However, the municipality officials did not stop chasing them, using excuses such as a redesign of the flowerbed on the median to evict them. These efforts failed as mothers intrepidly moved to other sites near the building. On Monday, some families moved to the Dağkapı Square, a busy place in central Diyarbakır. 40-year-old Asel Aydın is one of the mothers attending the protest. She tries to dry her tears while speaking. Showing her 14 year-old-son's photo, she says he disappeared two months ago and the family hasn't heard from him since.

Although the majority of the protestors are Peace and Democracy Party (BDP) voters, mothers claim their underage children have been deceived into joining the PKK. BDP, a party advocating more freedoms for the country's long-neglected Kurdish community, has close ties to the terrorist organization that claims it fights for Kurdish self-rule in southeastern Turkey.

Almost all of the families at the sit-in protest previously communicated with the BDP officials on their children's whereabouts. Most of the families refused to give names to people they spoke with and all of them got angrier when they received answers such as, "you should be proud (because your children joined the PKK)," and "It is not our business to find your children." Accusations such as remarks by BDP chairman Selahattin Demirtaş claimed the mothers were paid by the Turkish intelligence to defame the BDP.

Zeynep from Van says she has been trying to find her 14-year-old son for the last three months. After contacting BDP officials she said they had confirmed that her son is being held in Qandil, a mountain in Northern Iraq known to be the main hideout of the PKK. After joining the sit-in protest 15 days ago, Zeynep says in anger, "they told me I should be proud."

Durmuş Ölmez and his wife came from Ardahan in northwestern Turkey for their son Burak. Staying in Erzurum as a university student, Burak joined his friends for a picnic in Şanlıurfa's Ömerli village on April 4. This was the last time he contacted his family.

His father says Burak's photos in a PKK uniform were released on the Internet but his family believes he is being held against his will. They added that Burak was already engaged and making preparations for his wedding. Burak's father said, "my son neither has an interest nor sympathy for PKK. If he had, I would not be here today." "We left our seven-year-old daughter in the care of our neighbors. We are staying at a hotel for 20 days. We are exhausted. They said that we got paid for the protest. Who would have endured this ordeal for money?" he said.

Fethi Ulutaş, a father among the protesters, says none of the protestors aims to defame BDP; they just want their children back. Ulutaş says his 17-year-old son, Ferdi Ulutaş, disappeared three days after the March 30 local elections. Ferdi, a university student in the central Turkish city of Sivas, was brought to Diyarbakır by BDP as part of a group of assistants to the party campaign for the local elections. The father says although they knocked on many doors, no one offered them a helping hand and refused to give details about his son's whereabouts.

Hailing from the eastern city of Muş, 45-yearold Keje is holding her 24-year-old daughter's photo; she disappeared 14 months ago. The family hasn't heard from her since then. She went to the Parliament to speak with MPs. She met Sırrı Sakık, a BDP MP who now serves as a mayor. Keje claims Sakık told her she should be "proud." "He said 'we are politicians, this is not our duty.' Everyone knows that they offer money to students in return for unimportant errands at the party offices. It is a trick to fool the students into joining the PKK. They spread the PKK propaganda and everyone knows that." After Keje's remarks about the meeting with Sakık were published by the Turkish newspapers, Sakık denied the meeting and accused the mother of lying and making anti-BDP propaganda on purpose. "I met him at (the Parliament). They record everyone entering the Parliament. If you go and search the records you will see my name, the date of the visit and with whom I spoke to." She says she voted for BDP but their support is "abused in return."

One day, 17-year-old Merve told her mother that she and her elder sister by one year, Fatma were invited for a meeting at Diyarbakır Water and Sewerage Administration, where she worked as an intern. Their mother Felek did not suspect anything unusual and allowed them to go. "It has been seven months since then and I haven't heard from them," she says in tears. Painful words come out while she is holding her daughters' photos to the camera. "I just want them back no matter what, they are my babies," she says.

34-year-old Hatice Eren hails from the southeastern city of Batman. "We want legal regulations for everyone in the mountain," she says, referring to PKK hideouts. Her brother Fatih, a 19-year-old university student in the western city of Denizli, has been missing since May 6. "Their age or how they are taken to the mountain is irrelevant," the young woman says. "We are their families and we want them back as soon as possible," Eren says. She says that it is widely known that the PKK tries to reach out to the youth, especially the university students from the eastern part of the country, (where Kurdish population is concentrated) in order to receive their support and sympathy. "We are sitting in front of this municipality because we voted for them. It's their duty to help us." The municipality in Diyarbakır, like many others in the southeast, is run by BDP.

18-year-old Fatım Cebe from Mardin, an hour's drive from Diyarbakır, attends the protest with her elder sister Mahvet. Their brother is a 14 year-old student who, according to the witnesses, was abducted by a group of men driving a black car when he was leaving school on April 24. Fatım says "There are 6-7 other children in our neighborhood in Dargeçit (a district of Mardin). They were abducted just like my brother and we are here for all of them."

Another Kurdish woman attending the protest tells how her 57-year-old mother jumps at every ring of her doorbell or phone in case it is her son who went missing two years ago. "We just want our children, our brothers and sisters to come home. Is it too much to ask?" she says.
Leyla says it's her second day protesting. She comes from the province of Gaziantep and has photographs of her two daughters. Leyla breaks into tears while she tells how she is afraid that her elder daughter has also been "kidnapped" while she was searching for Neslihan, the younger daughter who disappeared first. "A mother's grief for her children is like nothing else," she says.

Not only mothers, but also fathers attend the sit-in protest. Men with tearful eyes are holding photos taken long before their children joined the PKK.

52-year-old father Şemsettin Güven says he has been looking for his 14-year-old son for more than eight months. Güven says he asked to see his son after he learned which PKK camp he was held in, "I was denied seeing my son. Previously, the children were allowed to see the visiting families, but after children sought to leave with their families, PKK denied them visiting the camps," he says.

Turkey covered a great distance with the state regulations which were a part of the reconciliation process actively launched in 2013 after Prime Minister Recep Tayyip Erdoğan's announcement for governmental negotiations with the jailed PKK leader Abdullah Öcalan.

In 2013, the People's Defense Forces/Center (HPG), the armed wing of the PKK, signed the Geneva Call's Deed of Commitment to protect children from armed conflict. However, it is known that the PKK is using child soldiers coming from various parts of southeastern and eastern Turkey. According to the Child Soldiers Global Report of 2008, which was prepared by a nongovernmental organization, PKK had used children in its forces "since 1994." However, the mothers' protests against the PKK and the BDP have had revolutionary value. 2350 children aged between 13 and 18, 70% of them under 16, have been taken to join the PKK in the last two years, according to Turkish intelligence reports.

Because of the recent protests, Abdullah Öcalan, the jailed leader of the PKK, reportedly said the PKK must end the suffering of the mothers.

Local humanitarian organizations also condemn the crime of recruiting child soldiers and call on the PKK to act according to international conventions. It is not clear whether the PKK will bow to the demands of grieving families but there is hope for the return of the children. Last week three young girls, including the 16-year-old daughter of one of the protesting mothers, were found in the city of Hakkari in a raid by security forces. The young girl told the media most children who were persuaded to join the terrorist organization regretted their decision.
Last Update: Jun 14, 2014 1:52 am
RELATED TOPICS