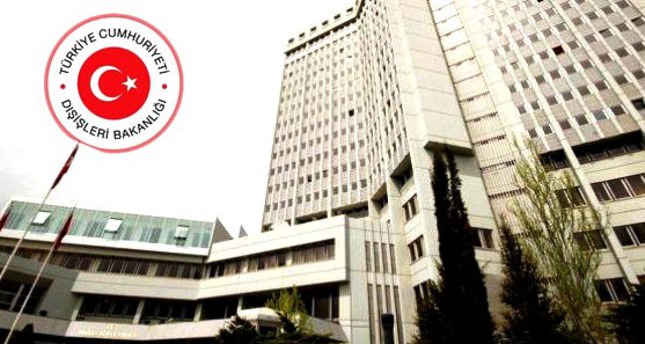 by AA Jun 14, 2014 12:00 am
Turkey is mobilized with all its means in order to ensure the safe return of the consulate staff and the lorry drivers abducted in Iraq last week, Turkish foreign ministry said in a statement issued on Saturday.

ISIL militants abducted 49 Turkish consulate staff members, including the consul-general and family members, in the Iraqi city of Mosul, after they abducted 31 Turkish drivers in a power plant in the Gyarah region of Mosul.

In a press release regarding the developments in Iraq, the foreign ministry said ISIL did not demand a ransom from Turkey for abducted citizen and added that they are in safe condition

The ministry has also warned Turkish citizens not to travel to Iraq as the security situation has deteriorated in the country and remains unpredictable.

The Turkish citizens in Mosul, Kirkuk, Salahuddin, Diyala, Anbar and Baghdad provinces should leave the country as immediately as possible, the statement said.

For the citizens to easily make their way to Turkey, Turkish Airlines will continue its regular flights from Iraqi cities of Baghdad, Basrah, Najaf, Suleymaniyah, Erbil, while at the same time increasing the passenger capacity of the scheduled flights and adding extra flights if needed, the ministry said.

As insecurity is spreading across Iraq, the foreign ministry said they would do whatever is necessary in order to minimize the negative effects of the current instability on Turkish citizens.

Official figures of the consular representatives show the number of Turkish citizens living in 15 Iraqi provinces apart from the four governor controlled by the Kurdish regional administration in northern Iraq is around 10,000.

The number of Turkish nationals with residence permit in the Kurdish regional administration in northern Iraq is around 110,000.