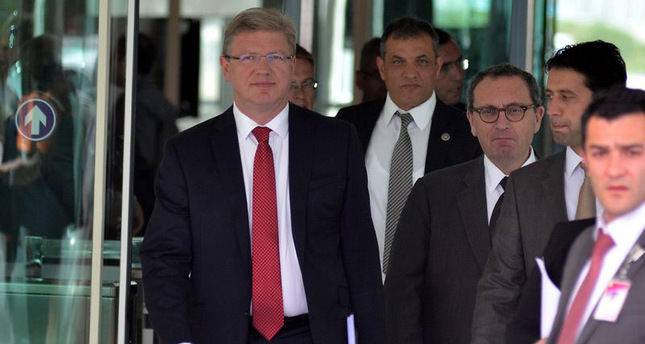 by Daily Sabah Jun 16, 2014 12:00 am
European Union Enlargement Commissioner Stefan Füle Monday arrived to Ankara for a two-day official visit to hold fresh talks on Turkey's EU bid and opening of certain chapters that Turkey is eager to meet.

As part of the visit, Füle met with Gül yesterday at the presidential palace in Ankara and later convened with Çavuşoğlu during dinner.
Following Turkey's temporary Twitter and YouTube ban during the March 30 local elections, Füle's visit to Turkey was postponed. As a result
this meeting is considered significant for Turkey to take a further step in its EU bid.

During his visit, Füle is to attend a working group meeting on Turkey's EU accession negotiations, particularly chapter 23 on "Judiciary and Fundamental Rights," which was kept closed due to political blockage from Greek Cypriots by showing the rifts over the future of the divided Cyprus Island as a reason.

Turkey began EU negotiations in 2005 and according to EU policy; the country must comply with 35 chapters to become an EU member. After a three years hiatus, negotiation chapters were opened again last year. With the commencement of the reunification process between Northern Cyprus and Southern Cyprus, which is an important obstacle against the opening of Chapter 23, Turkey seems to have the upper hand in its EU bid considering that Italy, being a strong supporter of Turkey in its EU accession period, will head the upcoming term of presidency amid EU countries.