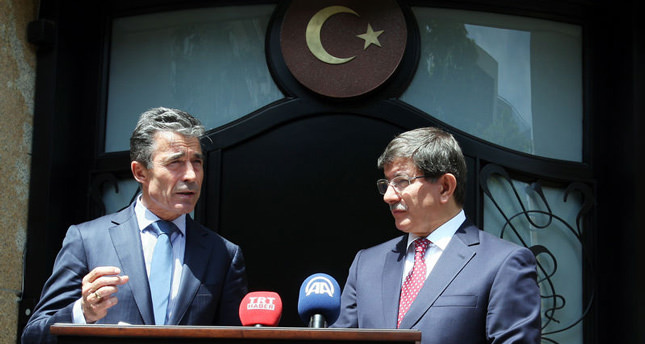 by AA Jun 16, 2014 12:00 am
NATO chief, Anders Fogh Rasmussen condemned Tuesday's attack on the Turkish consulate in Mosul and called for the immediate release of the 49 kidnapped Turkish Consulate staff in a meeting with Turkish Foreign Minister Ahmet Davutoğlu in Ankara on Monday.

"We want to see all the Turkish hostages released and we want to see them safe," Rasmussen told reporters following the meeting.

"Nothing can justify this criminal act and we will continue to consult with our ally Turkey."

Ahmet Davutoğlu thanked Rasmussen for his support and the solidarity he has shown for the Turkish abducted citizens in Mosul.

He also praised Rasmussen's support for the deployment of patriot missile batteries in southern Turkey set to intercept possible attacks from Syria.

"We are now facing serious challenges in a wide geographic area from the Mediterranean to the Black Sea and the Baltic," Davutoğlu added urging further cooperation within NATO.

During his visit, Rasmussen is scheduled to meet both President Abdullah Gül and Prime Minister Recep Tayyip Erdoğan concerning the attack on the Turkish Consulate in Mosul.