PKK urges supporters to end violence in the southeast 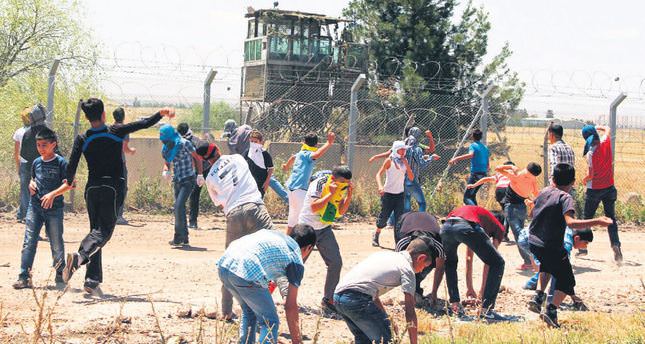 The PKK terrorist organization's political wing, the Kurdish Communities Union (KCK) released a statement calling on its supporters to refrain from resorting to violence in eastern and southeastern Turkey

The Kurdish Communities Union (KCK), the political wing of the terrorist PKK, has called on its supporters to end riots, blockades and acts of violence in eastern and southeastern Turkey. A statement from the KCK said blockades on roads and checkpoints set up by PKK supporters should be removed and abductions of law enforcement officials should end.

The KCK also urged businesses in southeastern and eastern regions not to close down in support of PKK protests. The statement claimed that protests by the terrorist organization's supporters against the construction of new military outposts in the region had succeeded. Also touching upon the notorious flag removal incident in the southeastern city of Diyarbakır, KCK officials said the removal "by a child" was used as a "tool of provocation by the government to cover up the massacre in Lice and the failure of the solution process."

The statement said the protests, which evolved into riots and attacks against security forces, were "legitimate" and "a resistance to show the Kurdish people's determined stance for freedom and democracy, as well as a step to contribute to the solution of the Kurdish question."

On removal of the Turkish flag at a military base, the KCK claimed it was the result of provocation plotted by "internal and external powers" and was "exploited by the government and opposition parties for political gains."

The statement noted that "resistance" against the construction of military outposts should continue but not in a violent way. "Democratic protests should continue, but road blockades, checkpoints and detention of soldiers and policemen and the closing of businesses should no longer occur," the statement read, adding that such "actions" are constructive only at certain times. "The protests in Lice (in Diyarbakır) and Meskan (in Hakkari) were successful. But we should change our way of protesting and develop a democratic serhıldan (uprising). If democratic and legitimate protests are held uninterruptedly, the people's democratic pressure for the solution of the Kurdish question will succeed," the statement said. The statement noted that changes in the methods of protest were necessitated by "political developments in the Middle East," referring to ISIS' takeover of cities in central and northern Iraq.

As the statement was released on websites linked to the PKK, a group from the terrorist organization's youth wing was blocking a road in the southeastern province of Elazığ. A police officer traveling with his family came under fire by PKK militants and was injured.

PKK supporters have been holding protests for weeks against the new military outposts that they described as a blow to the "solution" or reconciliation process initiated by the government to end the conflict with the terrorist organization and restore the rights of the Kurdish community. They often clash with security forces, dig trenches on main roads connecting southeastern and eastern cities and abduct people. They also set up checkpoints on blocked roads in a show of force by the PKK, which once drew considerable support from dissenting Kurds in the region. Along with protests by unarmed supporters, PKK militants also raid construction sites and burn trucks and bulldozers.

Last week, armed militants opened fire on security forces trying to disperse a pro-PKK demonstration in Diyarbakır's Lice district.
Troops returned fire, and two people, including an armed militant, were killed. The incident sparked nationwide protests, and in one such protest, a masked man, initially described as a 16-year-old boy, pulled down the Turkish flag at a military base in Diyarbakır.

The removal of the flag caused outrage in the country. These subsequent incidents are viewed as an attempt to provoke tensions both by the government and the PKK. The sides blame each other for trying to derail the reconciliation process. The PKK declared a de facto truce after the government made public that officials were conducting talks with Abdullah Öcalan, the jailed leader of the terrorist organization. However, the group later announced it would not lay down arms entirely, citing the slow progress of the reconciliation process.