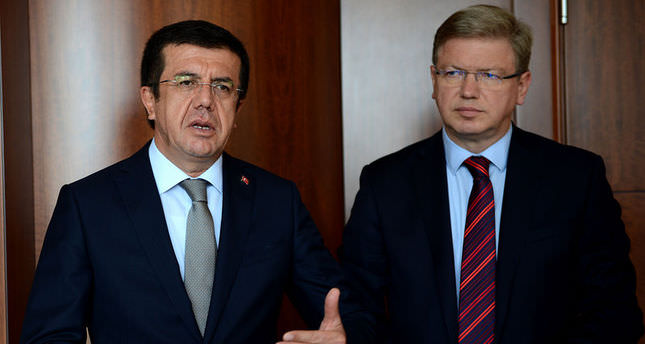 by AA Jun 17, 2014 12:00 am
Turkish Economy Minister Nihat Zeybekçi said Tuesday that Turkey should be included in the Transatlantic Trade and Investment Partnership talks between the United States and the EU.

Zeybekçi met with Stefan Füle, the European Commissioner for Enlargement and European Neighborhood Policy, in Ankara on Tuesday to talk about the Transatlantic Trade and Investment Partnership agreement and the Customs Union.

"Turkey is for the complete cooperation in the U.S., the EU and Turkey triangle," Zeybekçi said.

The Transatlantic Trade and Investment Partnership is a trade agreement that is being negotiated between the European Union and the United States.

It aims at removing trade barriers in a wide range of economic sectors to make it easier to buy and sell goods and services between the EU and the U.S.

On top of cutting tariffs across all sectors, the EU and the U.S. want to eliminatue barriers to trade such as differences in technical regulations, standards and approval procedures.

Zeybekçi also talked about Turkey's full membership process to the EU, and said Turkey cares about the processes that will allow the country to be included in the EU.

Fule stressed the importance of the Customs Union agreement, in which Turkey was included in 1995, and said the meeting also covered the modernization of the agreement.

The Customs Union allows Turkey and the European Union to exchange goods without any customs restrictions.

The EU enlargement chief will attend the 23rd Jurisdiction and Fundamental Rights' workshop meeting later, which the EU Minister Mevlüt Çavuşoğlu and Minister of Justice Bekir Bozdağ will address as well.